diary of a hotbed


It’s February, and for me that means it’s time to start thinking about horse manure! Every year we build a hotbed in the garden of Kennixton farmhouse. Even though it still feels like the middle of winter, for us gardeners it’s the very beginning of the new season. The soil in the veg patch will be cold and unwelcoming for a couple of months yet – but this is undersoil heating the traditional way. If you fancy having a go yourself - here’s an edited version of last year’s hotbed highlights:

A great big pile of steaming horse hockey may not be every girl's dream Valentine but I was quite excited by today’s delivery.  Next week I am tasked with building a hotbed and the pile of fresh, (has to be fresh to generate heat), strawy stable manure will be the base for the frame.  It’s a traditional, low tech way of producing undersoil heating to get an early start on seed sowing.

I googled 'hotbed' to get a definition:

I'm on about the first one here - a low tech way of warming soil to get a headstart on seed sowing.  It's a technique that's been around forever, but was particularly popular in the eighteenth century before steam or electric heat became our default settings.  Garden writers like William Cobbett, John Evelyn and Gilbert White devote pages to elaborate descriptions of how to set about building your hotbed and Beeton's Garden Management features it as a job for January in the monthly calendar.

Having trawled through all of them, I set to and gathered up the following materials:
...so here is my step by step 'hotbed photo guide': 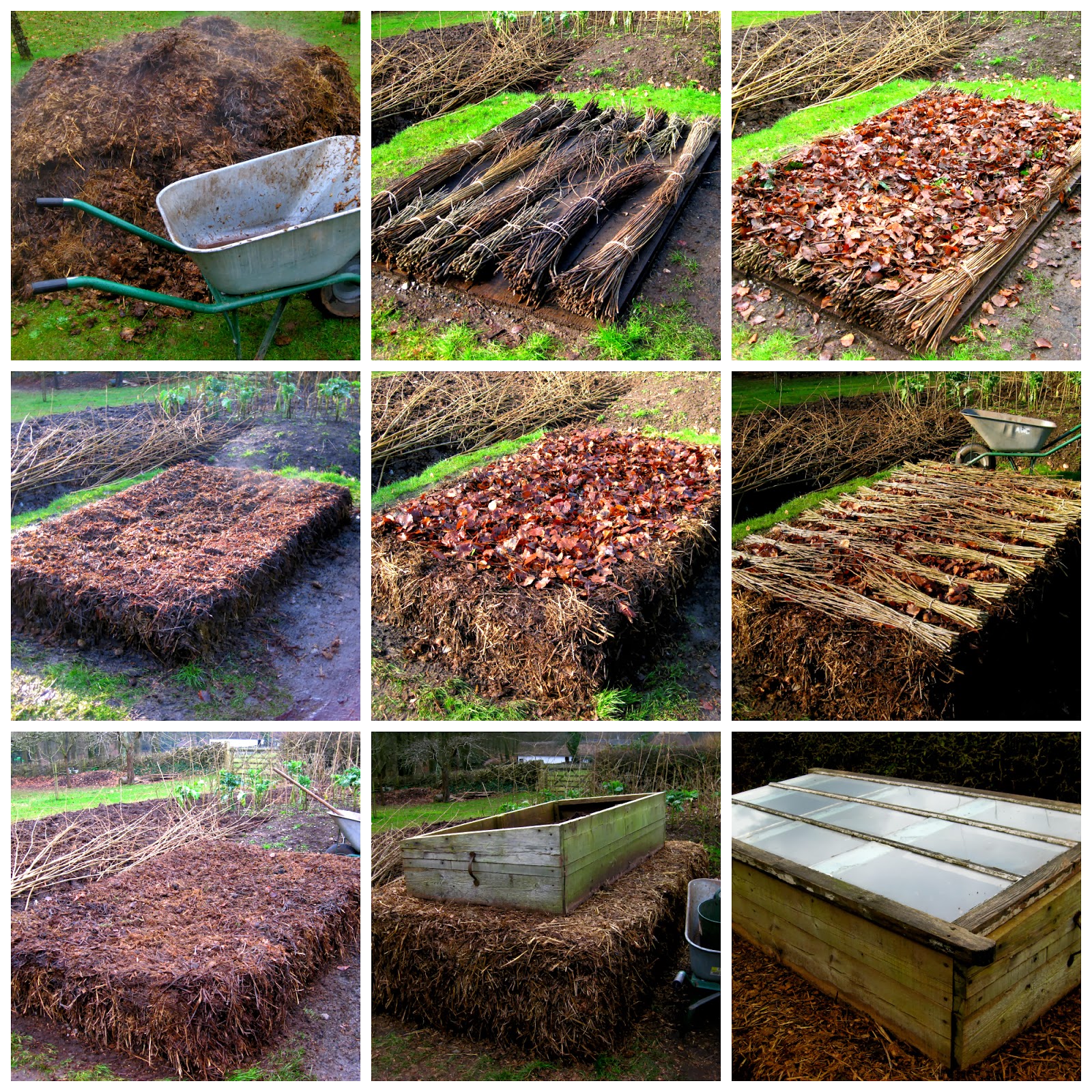 Build up the edges of each layer first then fill in the middle -
make sure it's all firmed down so that it doesn't sink unevenly.
Fill the frame with about 20cm depth of soil/compost mix. 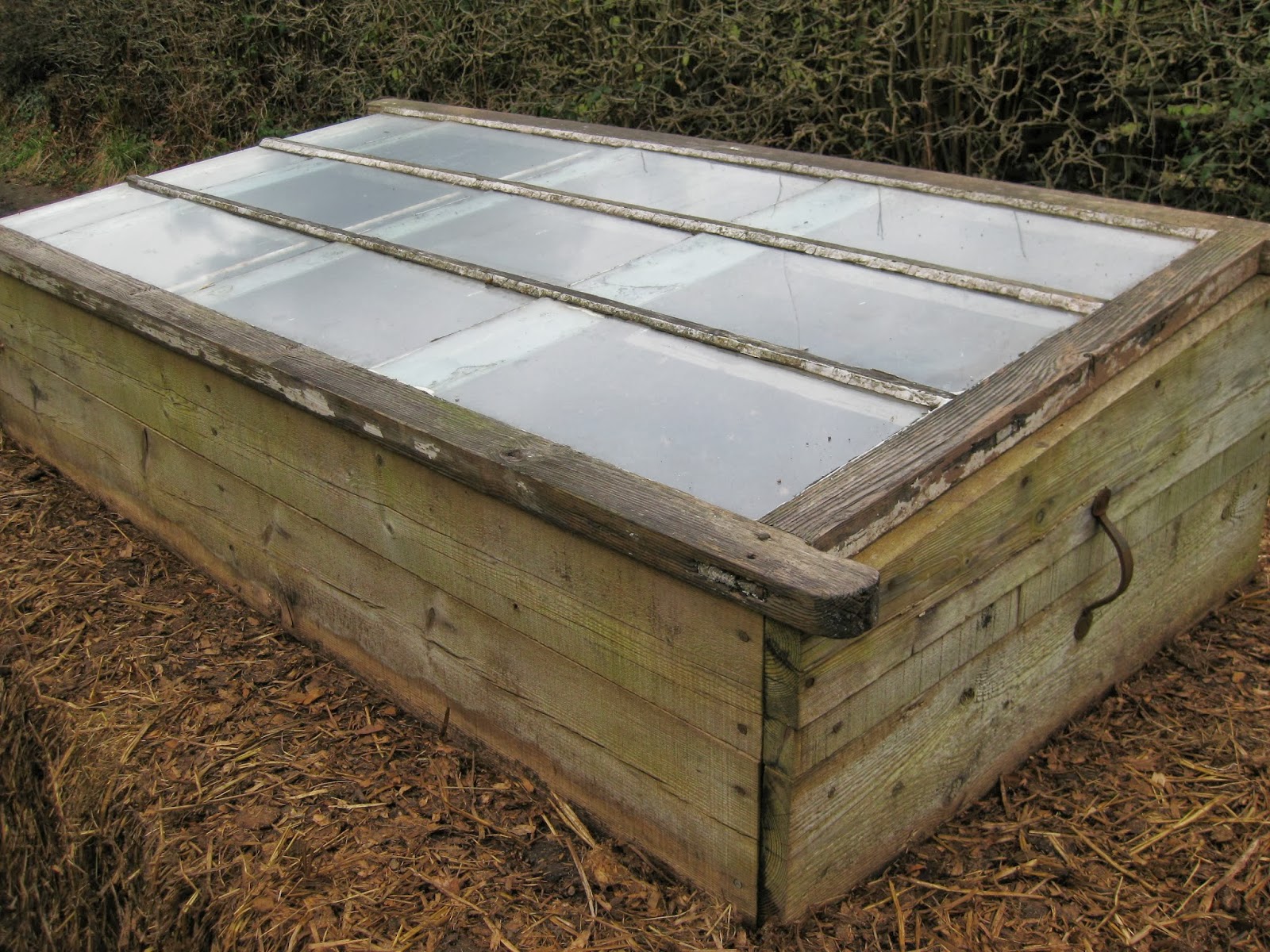 I have a fancy glazed 'light' to go on top of the frame,
but old window units would work just as well.

The heat should start to build up rapidly over the next few days - the books say that you should wait for the temperature to stabilise somewhere in the region of 21-23°C before sowing seeds.  This seems wildly ambitious at the moment, but who am I to doubt the wisdom of the ancients?  I have stuck a thermometer in and will report on progress - I feel a chart coming on....

The ambient temperature in the garden first thing this morning was 2°C, but snuggled up in the hotbed it was 11°C. It hasn't heated up as quickly as I expected - about a degree or so a day.  There's certainly been no danger of the perils described by William Cobbett in his book, The English Gardener (1829):

...the heat of dung, though it will probably not come to a blaze... will burn as completely as fire;
and, if the earth be put on too soon, it will burn the earth into a sort of cinder, in which nothing will ever grow...

I've been taking its temperature and worrying like an overanxious parent. But it's definitely doing something, and a pointed stick pushed into the middle of the bed comes out warm to the touch.  Eleven degrees is halfway to a summer's day and definitely good enough to sow seed - I think I'll give it another week to see how far it gets. I'll still be about a month ahead of the game compared to sowing directly into the soil.

We’ve been plunged back into sub zero temperatures this week, but the hotbed seems to have settled at a very respectable 16°C. So I decided today was the day to sow some seeds: some cabbages and kale, some leeks and a little row of parsley

Even though it's still head-shrinkingly cold here with a raw wind coming in from Siberia, my little seedlings have been growing away nicely in the hotbed.  Today I thinned the rows of brassicas so that each individual little plant has a bit of elbow room to develop.  If they were in open ground I would thin progressively to allow for potential losses from slugs and other lurking dangers like pooping cats and dustbathing birds. In the safety of the hotbed I thought I would cut to the chase and give them enough room to get to transplantable size in one go.  It looks a bit drastic when you first do it, but they will reward your bravery by growing on quicker.

The seeds that I sowed in the hotbed back in March are now ready for transplanting out into the open garden. There is a bucketful each of kale and cabbage plants, and enough seedling leeks for two decent rows.  I also have about twenty parsley seedlings that I'm hoping are at that 'hard to guess' moment - big enough to make it past the slugs, but small enough that the transplant process won't make them bolt straight into their flowering phase.  I'm sowing more leeks and cabbages straight into the ground but my hotbed babies should produce a much earlier crop. It's still very cosy in there (18°C).  Obviously the air temp has caught up somewhat by now, (although you wouldn't believe it listening to the rain hammering on the roof as I type this). The important point is that the temperature doesn't fall away at night, and the glass light protects the plants from being battered by the weather. 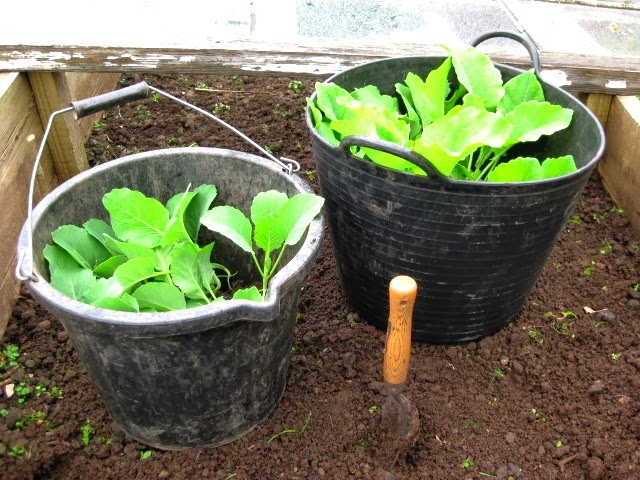 I've now filled the frame with six seedling cucumbers - okay, so I have to admit I cheated and started them off in pots on a sunny windowsill. This is my first go at this and I just wasn't sure how long the warmth would last, next year I'll have the confidence to sow in-situ. 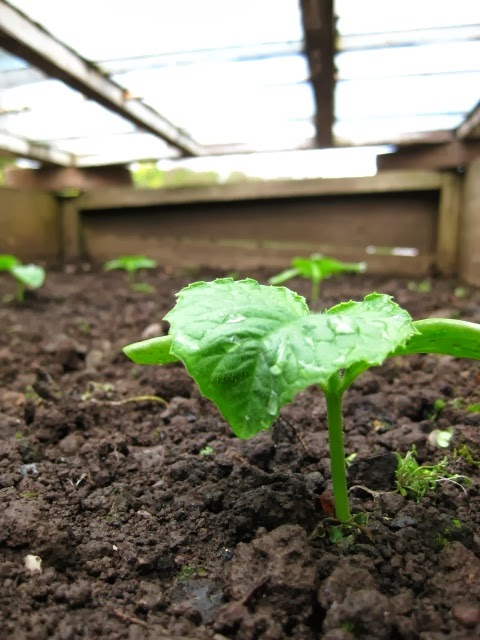 I've had a peaceful week in the September sunshine gathering produce for our Harvest Festival display – including leeks that started life in the hotbed and the last of the cucumbers. 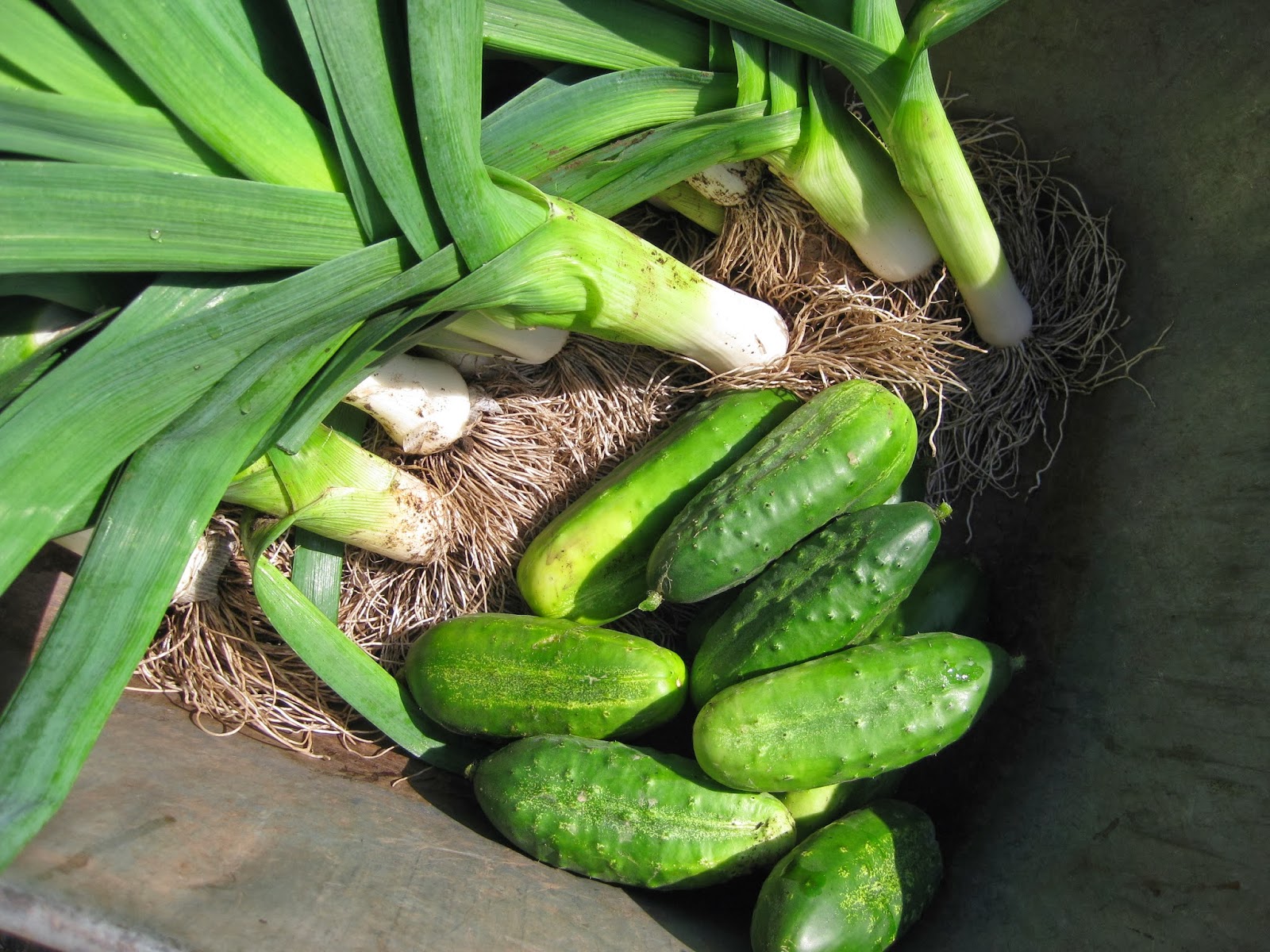 One of our reconstructed buildings at the museum is a Unitarian chapel from West Wales. Every year we host a Thanksgiving service and the gardening team always decorate the chapel with flowers and produce from the Estate. Since 2010 we have also held a Food Festival, so it seemed like a good fit to combine the two. It’s a great event that has really blossomed in the last couple of years. It feels like the entire Welsh food community come together to celebrate and showcase their work. The atmosphere is relaxed and friendly - the perfect way to round off the season. 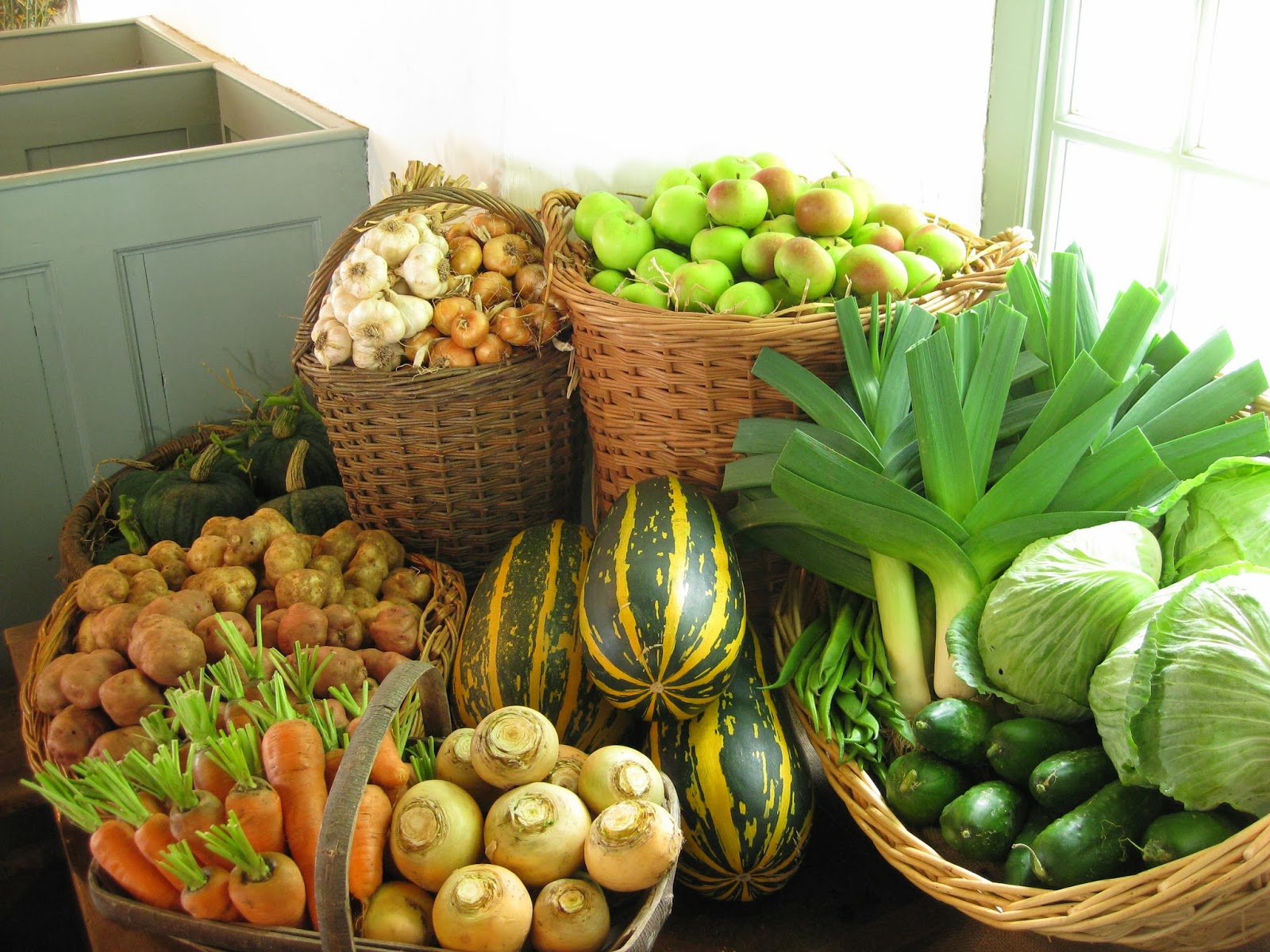