more from the orchard

I’ve just been watching a DVD about pruning produced by a well known seed house; a) because I was told to, and b) even though you think you know what you’re talking about, it’s always good to check, (especially if you’re planning on dishing out advice yourself).  It claimed to be copyright 2004, but I would say by the size of the hairdos that it was probably a remastered video from the late 80’s. It was well produced and informative and I have learned the following

- Seems like I mostly do know what I’m talking about – phew! (At least on the subject of pruning anyway).
- An hour is way too long for any kind of instructional film – if it’s more than 20 minutes it better have Johnny Depp in it.
- It might seem like a good idea to have men in tweed telling you that it’s all ‘quite simple really, just remember this handy rhyme…’ but after an hour they all sort of run together into ‘If it blooms before noon, then prune by June!’

So I promise I’ll try and keep the advice in bite size chunks - will maybe consider working on some rhyming mnemonics though.

Today the orchard is very snowy – it makes the tree forms stand out more though, which is handy for my next exposition: 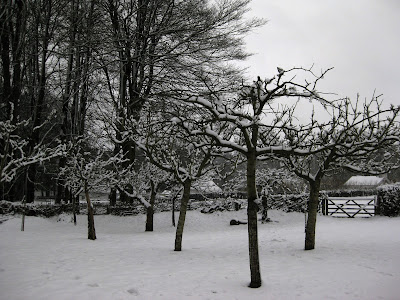 These trees are pruned as clear stem standards – this is a traditional look which would have been used in orchards where the intention was to graze livestock under the trees.  Modern orchards look more like vineyards, with densely planted rows of tightly pruned trees on ultra dwarfing rootstocks. Being able to carry out all pruning and picking operations at ground level is a huge advantage for commercial growers.

For your own backyard orchard, both styles have their advantages.  Clear stem trees are great for lounging around underneath, attaching hammocks etc and give any space a dollop of rustic charm.  More strictly pruned forms, like the espalier and cordons pictured below, are great for formal settings or anywhere where limited space is a consideration. 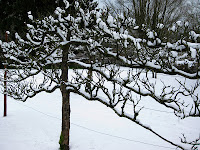 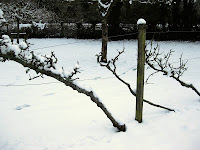 So think about your rootstocks people – that’s what controls the size of the tree. Pruning controls the shape, or ‘habit’ of the tree, but not the size.  Getting both right from the start will give you the jump on getting the backyard orchard of your dreams.

To get you started - here is a useful guide to rootstocks…

... and for all you nascent tree nerds out there – here is a guide to tree forms, as defined by the UK Horticultural Trades Association: 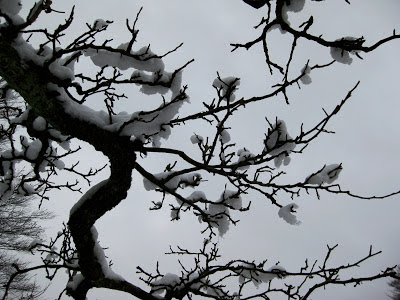