I had a plan for today.  It went something like this...

I would rise early, tie on my apron and whip up a batch of home made hot cross buns.  Then the house would be full of the welcoming scent of warm spice and Easter loveliness in time for the arrival of my old school friend and her family, who would be stopping by to break their journey from Wiltshire to Aberaeron.


So far so Mary Berry.

But yesterday was Mr Asparagus Pea's birthday and we went to bed last night slightly the worse for wear after a celebratory meal with friends and family.  This morning, undeterred by a bit of a thick head, I dragged myself downstairs to start baking, only to discover that the recipe required 3 risings. It would be tight for time but I decided to press on.  I set the dough to prove and returned to bed for a tiny bit more shut eye.  This was the moment that Mr Asparagus Pea, (who's normally on the ball with these things), emitted a groaning noise which translated as 'we forgot to put the clocks forward last night'.

Meanwhile, my very efficient friend had changed her clock before going to bed, unaware that it was one of those snazzy ones that update themselves at the required moment.  If I could do the physics I could tell you what the compound effect of our timing errors was...

...suffice to say the buns came out of the oven about 40 minutes after they had left the house.


So these are for you Family Meredith... 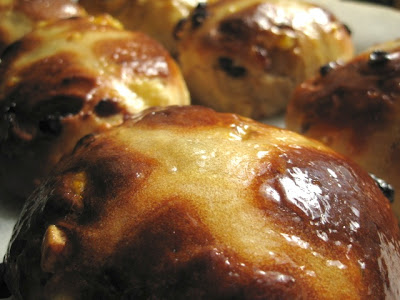 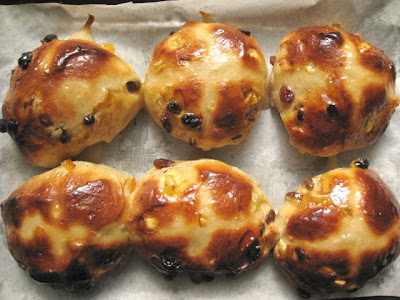 Sometimes it seems like the marketing dept were having an off day when it comes to the naming of certain plants and animals. (Stand up comedian Tudur Owen does a brilliant riff on this subject based around the Welsh word for jellyfish - very rude and very funny)*. Today, since the weather is still absolute pants, I would like to champion the cause of the somewhat unfairly named Hairy Bittercress. Neither particularly hairy nor overwhelmingly bitter, it has a pepperiness and bite that would make it a happy sub for cultivated rocket or watercress in a salad.  From a foraging point of view it also has the added benefits of being both plentiful and easy to identify. 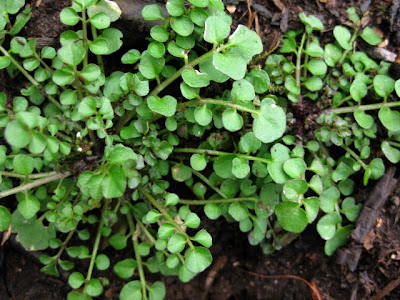 It's an invasive garden weed that seeds itself freely around the veg patch.  These were gathered from one of my compost heaps so I had no qualms about whipping them all out.  (It is, however, very bad foraging manners, not to mention illegal in some cases, to pull things up by their roots in the wild).

As it's not really salad weather, I decided that pesto was the order of the day. So bag in hand, I set off for the stream banks to see if the wild garlic was showing itself yet.  This is another favourite of the novice forager (like myself), as all parts of the plant have an unmistakable aroma of garlic.  It's also a perennial so it stays put - once you've found a favourite patch on a shady bank, you can go back year after year. 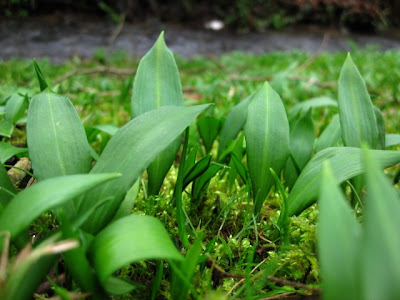 I favour a 'chuck it all in the food processor' approach to pesto based on the following ingredients: 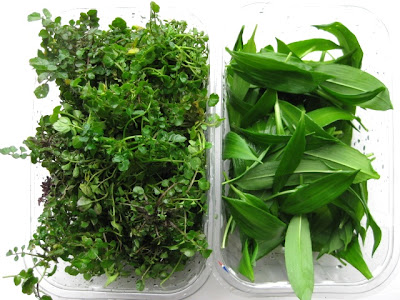 an equal(ish) quantity by volume of grated parmesan

olive oil to loosen to the desired (sloppy) consistency 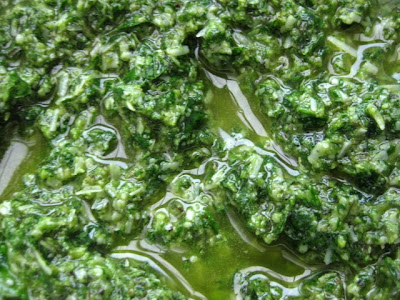 It will keep for about a week in the fridge or you can freeze any leftovers to use another time.
The books say to leave the cheese out to freeze it, but I think it works just fine with the cheese in. 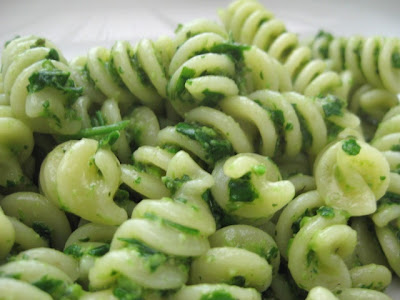 *The literal translation of one of the Welsh words for jellyfish is the 'See You Next Tuesday (?!?!) Of The Sea'

Something strange happens at this time of year - there's a moment of limbo where as well as being excited by the tiny signs of life and things to come,  it feels as if none of it will ever happen.  The light is bright but the temperatures are holding everything back.

The lack of distraction makes you notice the details that might otherwise pass you by.

I walk backwards and forwards under these beech trees, past this mossy dry stone wall nearly every day. A little bit of overnight rain gave a shine to everthing that made me stop and stare. 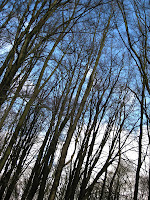 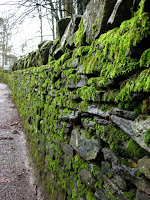 the trees have a muscular quality to them - like elephants' legs 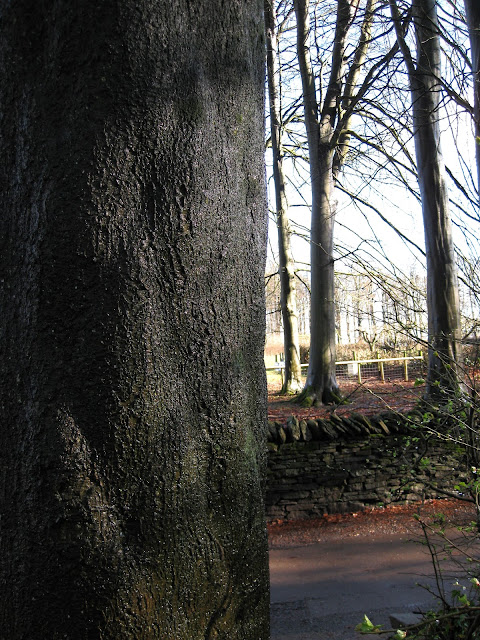 the moss makes the most beautiful miniature lansdcapes 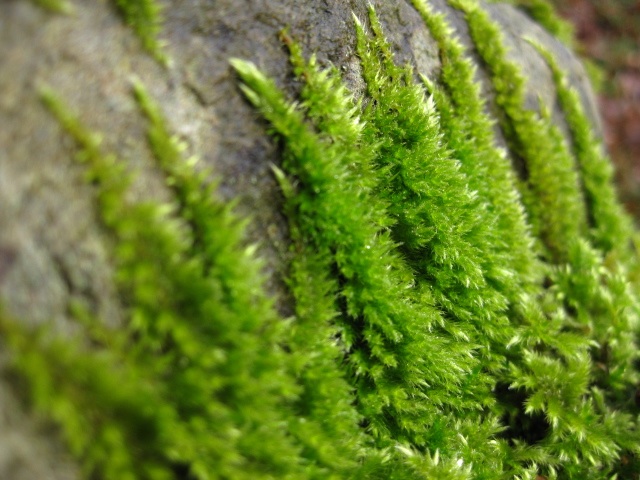 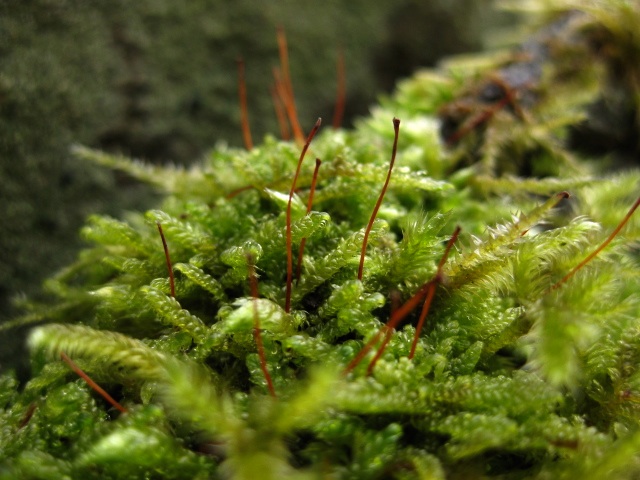 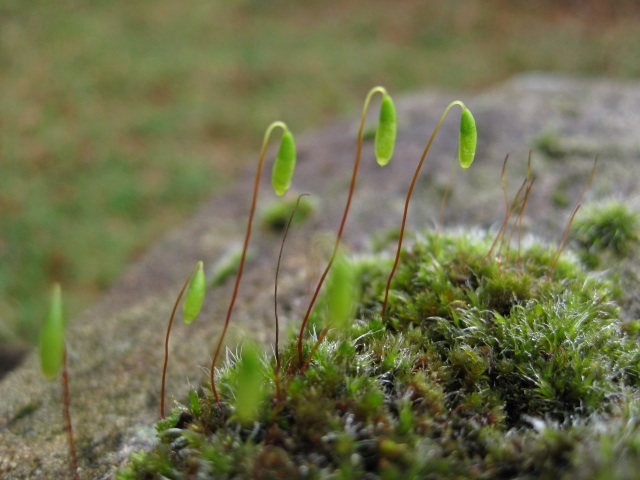 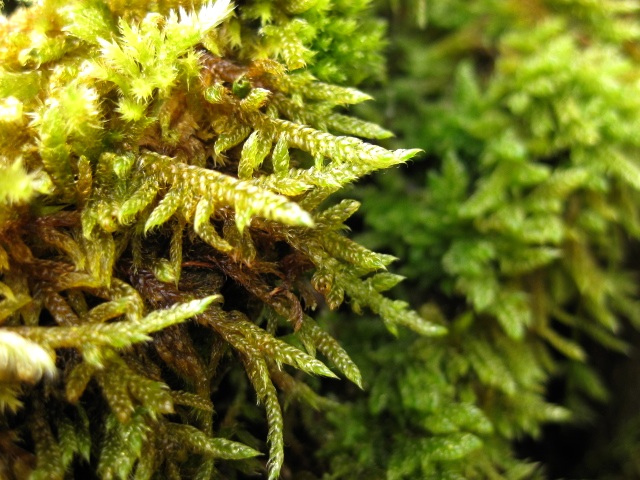 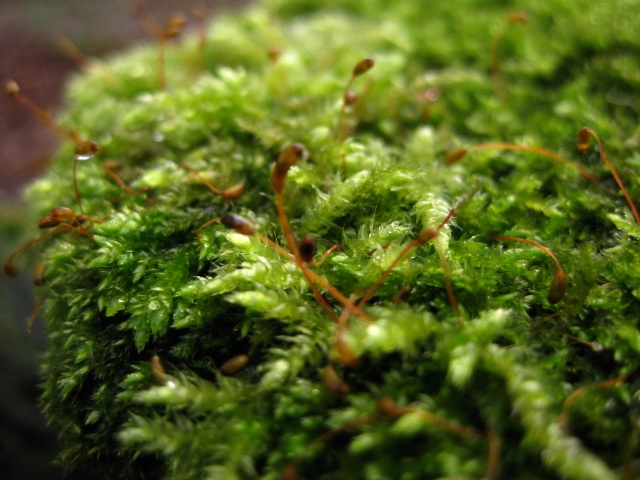 I'm sure there's a special word for this in Japanese

Posted by Asparagus Pea at 11:25 No comments:

I am a good girl - I eat my greens, (and I have very curly hair), but by the time it gets to March I am sick of cabbage.  The dark green crinkle of a Savoy that used to make me salivate in the supermarket produce section, now leaves me feeling slightly uninspired. I can still raise my enthusiasm for the irony bite of a bit of purple sprouting broccoli - but really I long for the soft new greens of spring, (and I refuse to buy them air freighted in from N Africa).

So today, after a quick flick through the foraging books, I set off to see what the hedgerows had to offer.  Started with a bit of surreptitious munching on new hawthorn leaves (okay in a nondescript sort of way), followed by another try at Good King Henry from the herb bed (bleurgh!), then I donned a fetching pair of latex gloves and collected a bag of stinging nettle tops.


I have long been meaning to check out the delights of the humble nettle, but it's usually too late in the season by the time it occurs to me.  There's plenty of info about how fantastic they are nutritionally - packed with iron, calcium, vitamins A and C, as well loads of important trace elements.  They're also traditionally valued as a spring tonic with many medicinal uses - including increasing the amount of lead in a gentleman's pencil, and soothing the rages of a lady who may be suffering from a touch of Irritable Cow Syndrome.


But do they taste any good?

Wasn't feeling in a soupy mood so I decided to whip up a nettle omelette:


Verdict:  Delicious! (in a slightly earthy, nutty kind of way). Will definitely be doing this again.

Even though we've been plunged back into sub zero temperatures this week, the hotbed seems to have settled at a very respectable 16 degrees C.


So I decided today was the day to sow some seeds. 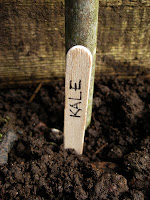 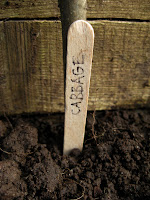 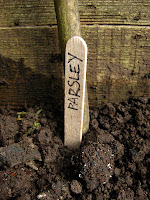 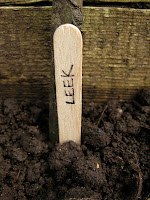 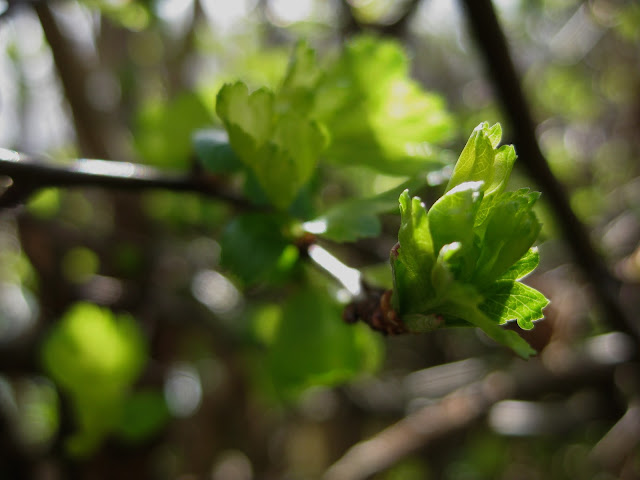 And as the hawthorn leaves begin to pop in the hedgerows, I start to look for signs of life in the veggie beds...... 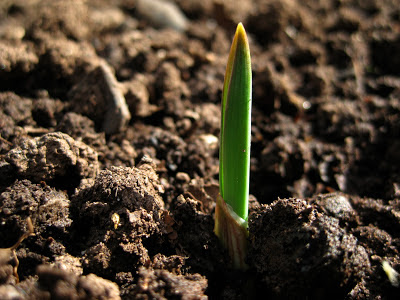 ...tiny green nibs of garlic poking through the soil.

Also, the hardwood cuttings that I took from the gooseberry bushes when I pruned them, are starting to produce little frills of green from the buds. 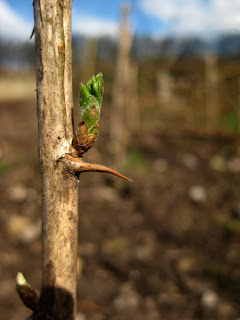 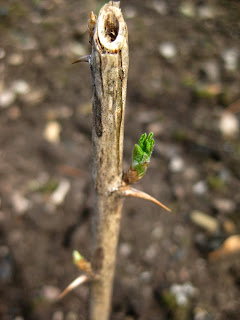 They have spent the whole winter looking like rather unprepossessing thorny pencils stuck in the ground - but now they promise to be new little plants. (For free too - what could be better?)

I know it's not really enough for a fanfare of trumpets - but these little green shoots are the first hints of warmth and growth and good things to come.
Posted by Asparagus Pea at 19:08 2 comments:

I was hoping to get on with a bit of soil prep in the veg beds today but the weather had other ideas...

...but hey - it's Wales and I guess if you minded rain too much, you wouldn't live here.

The forecast says the temperature will be dropping right off again next week, but this little mild spell with its misty rain has coaxed out the first of the spring blossom.  As I whizzed home down the fast road, the verges were a froth of blackthorn. Driving down the A4232 might not be as romantic as surfing the cherry blossom wave in Japan, but it inspired me to drag Mr Asparagus Pea (and his new digital SLR) into the back alley for a spot of cherry blossom viewing when I got home. 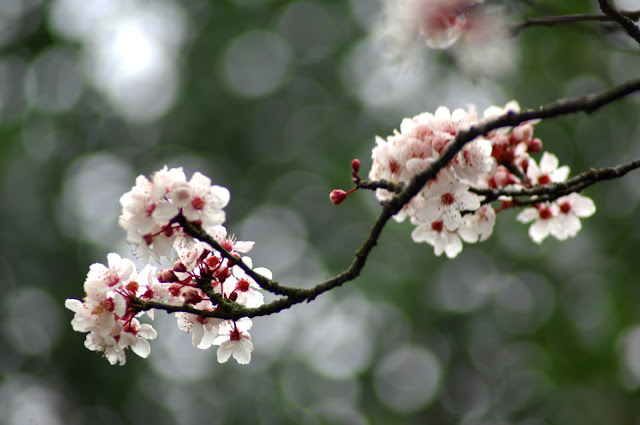 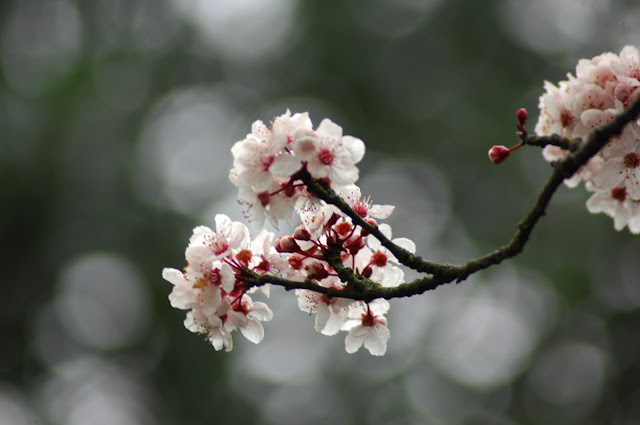 Our little hanami for 2 under the neighbour's tree caused a few raised eyebrows from the passing troubled teens, but Mr AP was very happy to have a chance to show off his new toy.  Nice zoom lens!
Posted by Asparagus Pea at 17:29 2 comments:

halfway to a summer's day

As promised, here is an update on the hotbed.

The ambient temperature in the garden first thing this morning was 2 degrees, but snuggled up in the hotbed it was..... 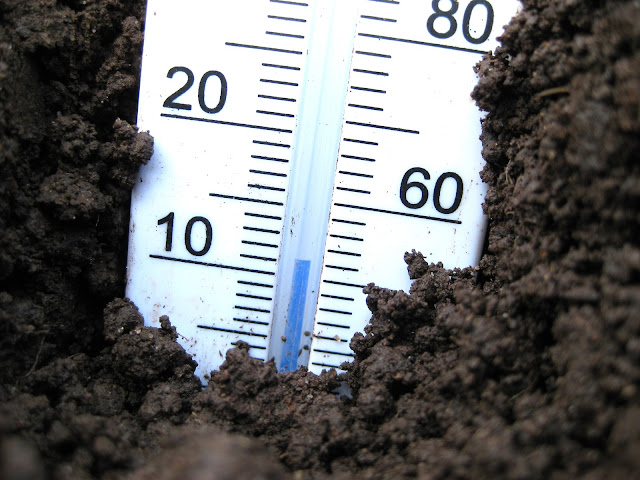 It hasn't heated up as quickly as I expected - about a degree or so a day.  There's certainly been no danger of the perils described by William Cobbett in his book, The English Gardener (1829):


...the heat of dung, though it will probably not come to a blaze... will burn as completely as fire; and, if the earth be put on too soon, it will burn the earth into a sort of cinder, in which nothing will ever grow...

I've been taking its temperature like an over anxious parent and worrying - was it something I did?


Maybe it's because I included some beech leaves in the mix?
Maybe it dried out too much while I was making it?*
Maybe I firmed it down too much in the middle and excluded oxygen?

But it's definitely doing something and a pointed stick pushed into the middle of the bed comes out warm to the touch.  Eleven degrees is halfway to a summer's day and definitely good enough to sow seed - I think I'll give it another week to see how far it gets. I'll still be about a month ahead of the game compared to sowing directly into the soil.

Hope spring is starting to spring in your garden...
Posted by Asparagus Pea at 18:20 No comments:

Email ThisBlogThis!Share to TwitterShare to FacebookShare to Pinterest
Labels: hotbed

the first day of spring

It's the first day of spring and it's St David's Day here in Wales.

We finally managed to finish all the winter pruning in the orchard this week.  The books say that the trees are dormant from November to March.  As you can see from the buds, this pear tree clearly hasn't read the books and has woken up early.

When you're doing formative pruning on young trees I think it's helpful to know an important thing about how trees grow:

they don't stretch - they add on.

So when you're looking at your tree it's not going to get bigger like someone is blowing it up with a bicycle pump - it's going to add bits on like building with Lego.  The branch at nose height will always be at nose height unless you cut it off, (the branch - not your nose), it will never be 10 feet up in the air.  With young trees you should be working on making a nice sturdy framework with well spaced branches.  The bit that's going to have the fruit on it comes later.

here is a before and after of a young apple

I know it looks a bit drastic, but the mature tree will be so much better if you prune for shape in the first few years.  Some trees will produce a bit of fruit when they're quite young, which runs the risk of the branches snapping under their own weight.  Now that's much more heartbreaking than a bit of strict pruning in the name of sturdiness!

And now - as it's St Davids Day, a gratuitous picture of a (giant) daffodil....

Posted by Asparagus Pea at 18:54 No comments: