My lovely big niece is currently doing her final exams at university. We decided that regularly looking at pictures of cute baby animals/humans is a good way to manage your exam stress and nerves. So this one is for you sweetie - baby piggies born on the farm at work, less than 24 hrs old. Enjoy!

We've been in our house for almost exactly a year now - and we're on countdown to the arrival of the builders for the next stage of our renovation plans. That will be knocking the kitchen through into the (rebuilt) lean to conservatory, getting rid of the outside toilet and dividing the third reception room to create a small study on one side, and a laundry room with downstairs WC on the other. This will make the most of the fabulousness that is the SW facing aspect of the back of the house.  At the moment the outside lav is the best seat in the house - much as I love sitting there with the door open, bathed in sunshine, it does seem like a bit of a waste.  So we'll be gaining that space into the kitchen and putting in a big window.

The family who owned this house for years were Italian and somebody obviously loved the garden very much. As well as two plum trees and an apple, there was also an enormous fig tree that shaded the whole garden, two grapevines and a big bay tree. It must have been a little piece of Italy right here in Cardiff.  We also found a homemade grape press in the attic made from an old laundry mangle, so there must have been wine making going on too - living La DolceVita.

This week I have had a few days off work to do some preparation for the landscaping needed to create the new back door area. As I cleared, cut back and tidied, I came across loads and loads of pots. All shapes and sizes, ceramic, plastic, baskets, plain and fancy (sooo fancy!). We're keeping a few of the best ones, but I decided that the rest could go out onto the pavement for a bit of 'community recycling'. 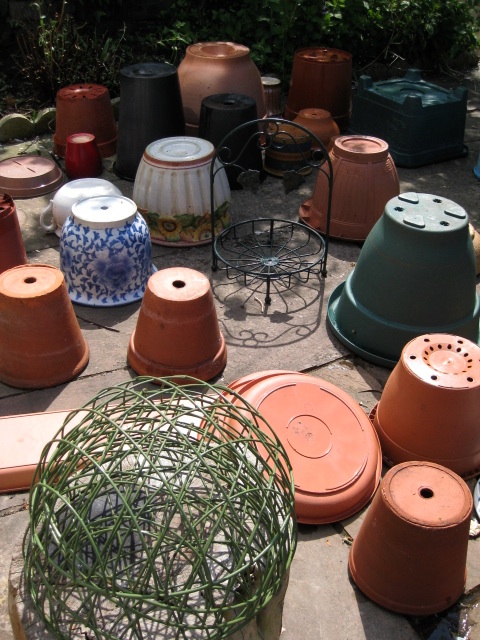 so we scrubbed them down 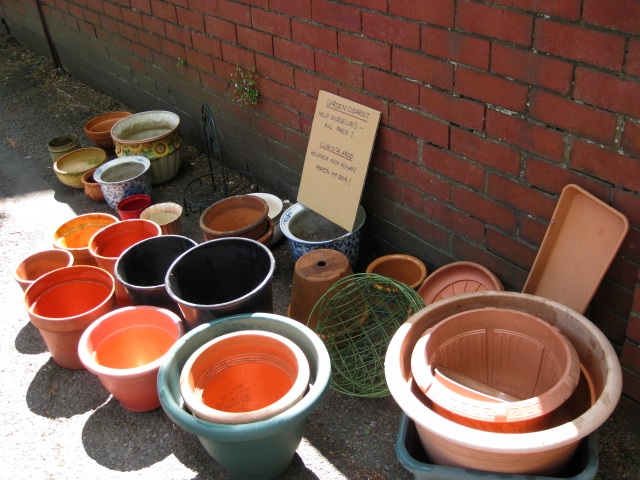 put them out the front 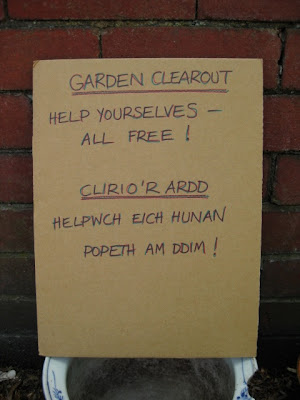 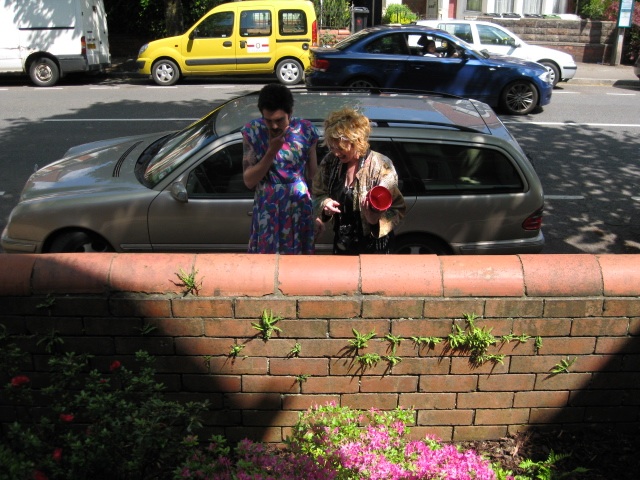 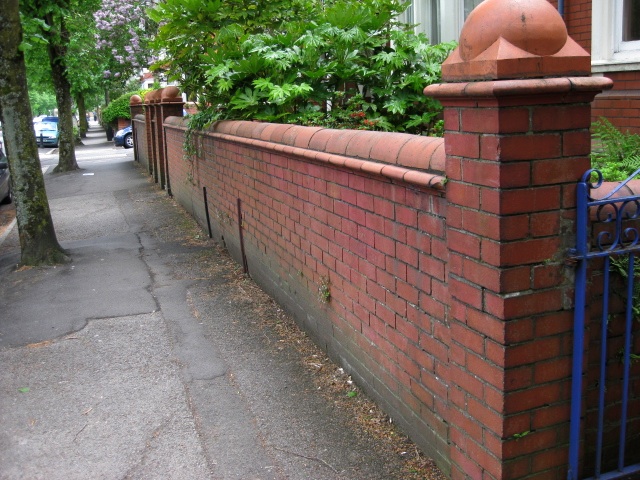 2 hours later - all gone
(even the sign - nice piece of cardboard, that'll be handy!) 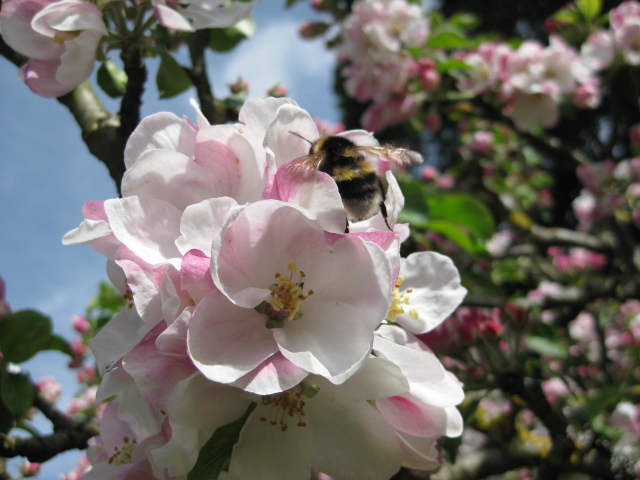 Blossom time is in full swing and the orchards are humming with activity.  It's a beautiful sunny day today, (hooray), and the bees are busy in the trees collecting pollen and nectar.  So I thought I'd show you a classic example of what 'pollination groups' mean in relation to fruit trees. 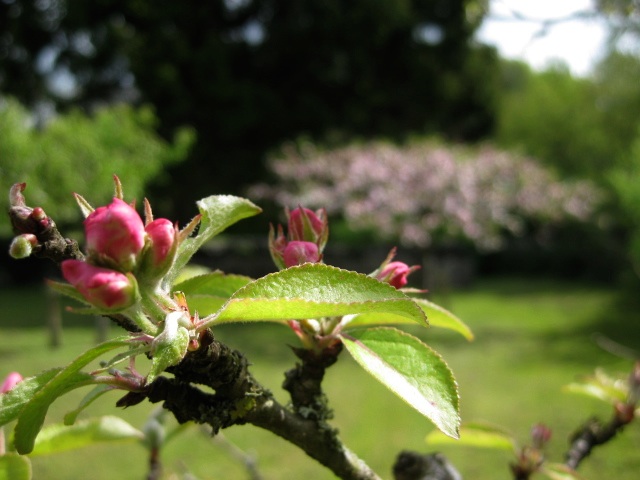 Most fruit trees can't pollinate themselves, they need a friend of the same species.*  (Yes, it's 'the birds and the bees' talk again!).  This friend is only good, in reproductive terms, if it has its flowers open at the same time.  In order to help you choose trees that are good pollination partners, some kindly scientists have split them into groups numbered 1-5. Number ones are first out of the blocks and number fives are the last to flower. Trees are good to get fruity with another individual from the same group, or one number either side.**

The bees that are busy visiting the flowers on this tree... 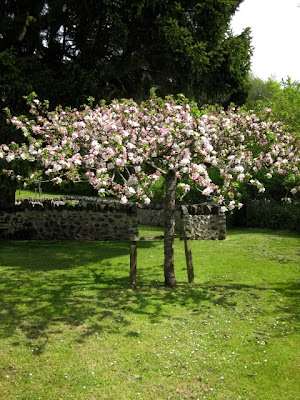 ...can't transfer pollen to the flowers on this tree because its buds are still closed. 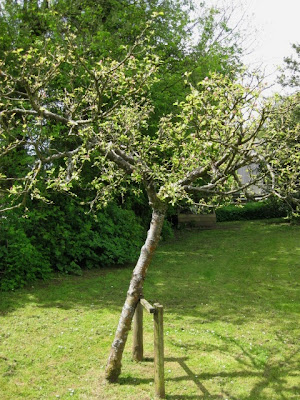 So if you're planning a backyard orchard, think about pollination groups when you choose your trees.
(The info will be on the back of the label). 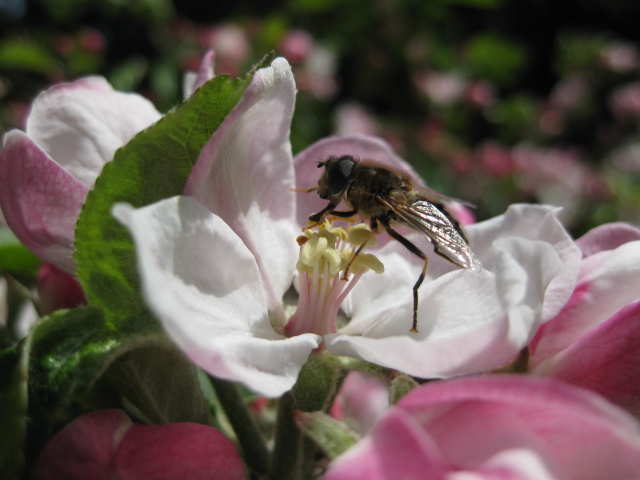 Check out these previous posts for more fruit related blatherings﻿ 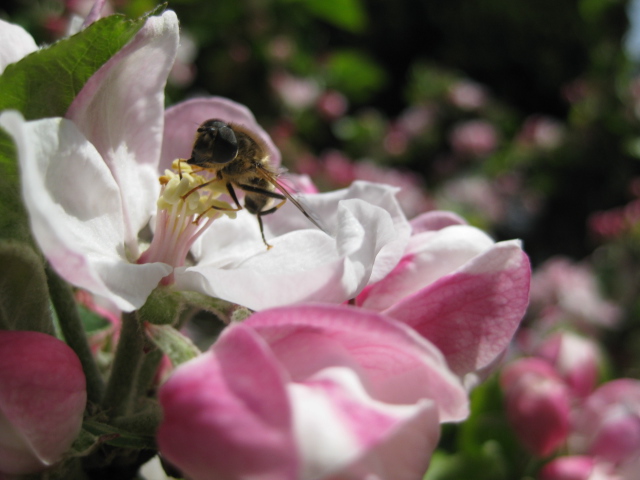 * We're talking apples with apples, and pears with pears etc.  None of that weird inter-species reproductive stuff on my watch, thank you very much!﻿
** Some things need two other individuals to pollinate them - they're called triploids, (although I'm sure we can all think of a few other names for that kind of behaviour!). Bramley apples are probably the most well known example of this.

The seeds that I sowed in the hotbed back in March are now ready for transplanting out into the open garden.  There is a bucket full each of kale and cabbage plants, and enough seedling leeks for two decent rows.  I also have about twenty parsley seedlings that I'm hoping are at that 'hard to guess' moment - big enough to make it past the slugs, but small enough that the transplant process won't make them bolt straight into their flowering phase.  I'm sowing more leeks and cabbages straight into the ground but my hotbed babies should produce a much earlier crop.

As you can see the it's still very cosy in there.  Obviously the air temp has caught up somewhat by now, (although you wouldn't believe it listening to the rain hammering on the roof as I type this).  The important point is that the temperature doesn't fall away at night and the glass light protects the plants from being battered by the weather.


I've put 6 cucumbers in there - okay, so I have to admit I cheated and started them off in pots on a sunny windowsill. This is my first go at this and I just wasn't sure how long the warmth would last, next year I'll have the confidence to sow in-situ.  I realise this picture makes it look like the Norman Foster glasshouse at the National Botanic Garden of Wales, but it's just my lil old hotbed.  *smiles with fake modesty*

The cucumbers are a variety called 'Parisian Pickling' from Real Seeds, which claim to be good as a gherkin/cornichon for pickling but also okay to grow on as small salad cucumbers.  Previous hotbeds have produced big gluts of prickly skinned fruit that no-one was interested in buying - we couldn't even give them away, which seems a bit sad. We get through tons of pickled cucumbers in this house - my favourites are Mrs Elswood's Haimisha and the Ogorki Kwaszone ones from the Polish section in the supermarket.  So it seems like a no-brainer to put the two things together and have a go at pickling my own. I'm getting in touch with my inner granny - maybe I'll start wearing a headscarf tied under my chin too.  Watch this space...
Posted by Asparagus Pea at 14:38 1 comment:

After a lot of false starts, jail breaks and general messing about - we have finally managed to get Poopsie the lamb to stay out in the field all day. She's happy to follow me for a bottle which cuts down on the amount of chasing around and rugby tackling that might otherwise be required.  We have a Llanwenog ewe, who lambed very late, in the field with her week old twins - so Poops has some company. (As you will see - there seems to have been some kind of misunderstanding with the choice of ram!).  So Poopsie is now busy spending her days learning to eat grass and playing 'I'm a sheep - you're a sheep' with her new mini-flock.

Posted by Asparagus Pea at 23:05 No comments:

out of the darkness...

In one of the gardens that I look after I have inherited a patch of sea kale. It's an attractive plant with bluey grey leaves, whose natural habitat is a shingle beach - it was famously much beloved by the filmaker Derek Jarman who allowed it to flourish in his iconic garden in Dungeness. But my plants are well past their prime, so to help me decide whether to rip out/renovate/replant, I thought I would apply the taste test.  It's on the list of edible perennials, but it has always struck me as being in the 'I'd have to be desperate' section.  The leaves are leathery, the stalks are unappealingly stringy and the whole thing has a slightly sulphurous hint of overboiled cabbage.

Had a bit of a read up and discovered that the advice is to force the plants by covering over the crowns and excluding light. So I rustled up a couple of terracotta rhubarb forcing pots from the shed and put them over the plants a few months ago, just as the crowns were beginning to show signs of stirring.

After a whole lot of not much happening at the start, they have now started to produce an abundance of primrose yellow stems, topped with delicate frills of pale green leaves.

The flavour is somewhere between asparagus and garden peas.

I gave them a quick steam with the last pick of the purple sprouting broccoli, and served them with butter and black pepper, but they're tender enough to eat raw in a salad if you want to.


I've decided they're definitely worth their place in the garden, and have just sown a packet of seed so I can establish a new patch of vigorous young plants. Looking forward to a few more picks before I whip the pots off and let the light shine in for the rest of the year.
Posted by Asparagus Pea at 18:21 5 comments:

Over the past couple of months I've been trying to educate myself about the joy of foraging. Here are my findings so far:

With that last point in mind, my eye fell upon the particularly lush patch of weeds that flourishes around the beehives at work.  The uniquely uncomfortable combination of ear defenders and bee protection headgear means that it doesn't get strimmed very often.  A quick shuffle through my reference books revealed that the three things growing there in profusion were ideal candidates for a wild greens recipe. 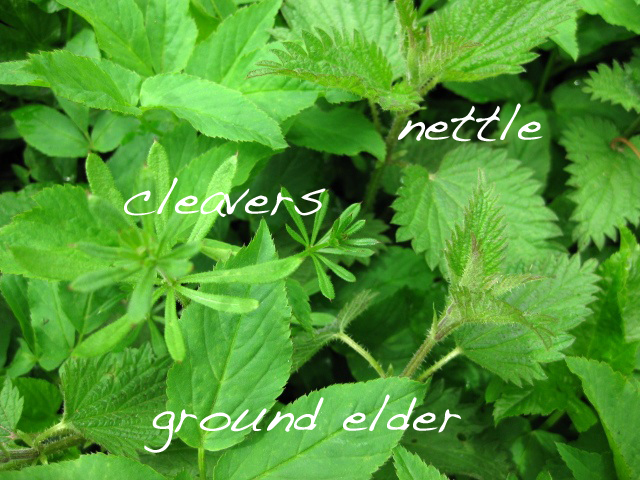 Anyone who has ever looked at books about wild food or heritage vegetables will be familiar with the words 'an acceptable substitute for spinach'. So harnessing the spirit of my inner elderly Greek woman, (the one that's usually squashed underneath the 6' kiwi bird), I gathered a generous bag full of greens to make hortakopita.  That's the wild food version of the greek spinach and feta pie, spanakopita. 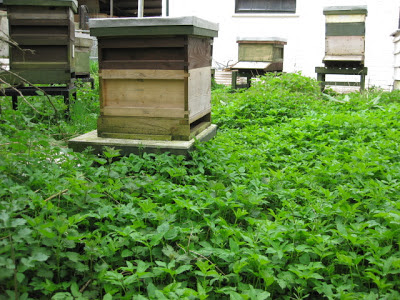 had to sneak over the fence to avoid upsetting the bees 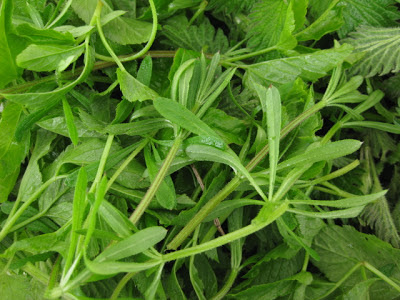 here's the greens after I washed them 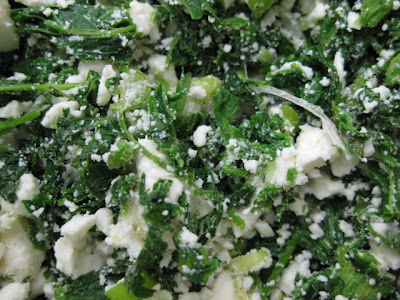 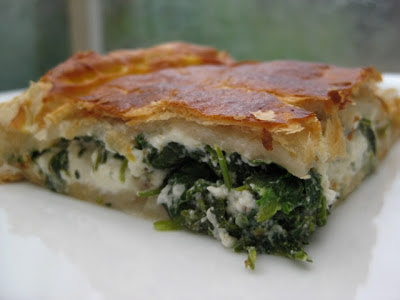 Verdict: Delicious - and all the better for growing right on my doorstep.
I used store bought puff pastry rather than filo to speed up the proceedings.

Way back one cold, rainy Saturday morning in November, I dragged Mr Asparagus Pea out of bed very early to come in to work with me and shoot a little video about pruning rambling roses. Then the following morning I did it again! (Good job he loves me huh?). Pear tree this time - but that's another story for another day.


This week we finally got round to finishing the editing process on the rose pruning.


here's how they're looking now... 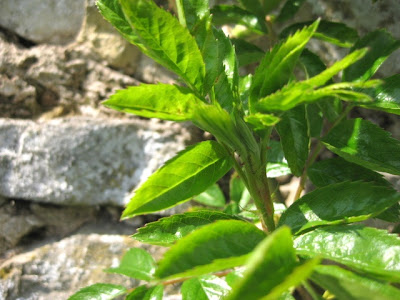 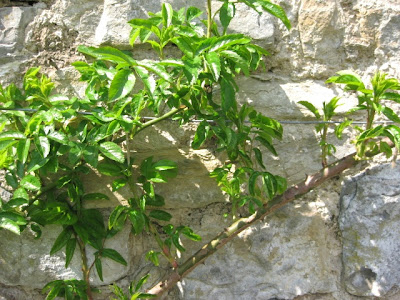 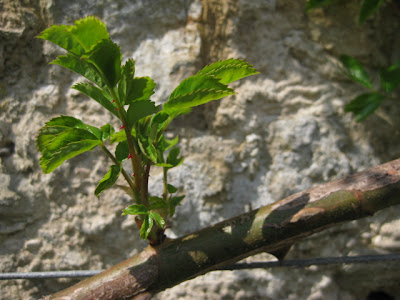 ... and here's a link to the video we made...
(the captions are bilingual - Welsh/English)