the road to rhosllanerchrugog

Okay - this isn't really a post about Rhosllanerchrugog….
But we do drive past it on the way to visit Mr AP's mum in N Wales,
and this one of my favourite road signs. 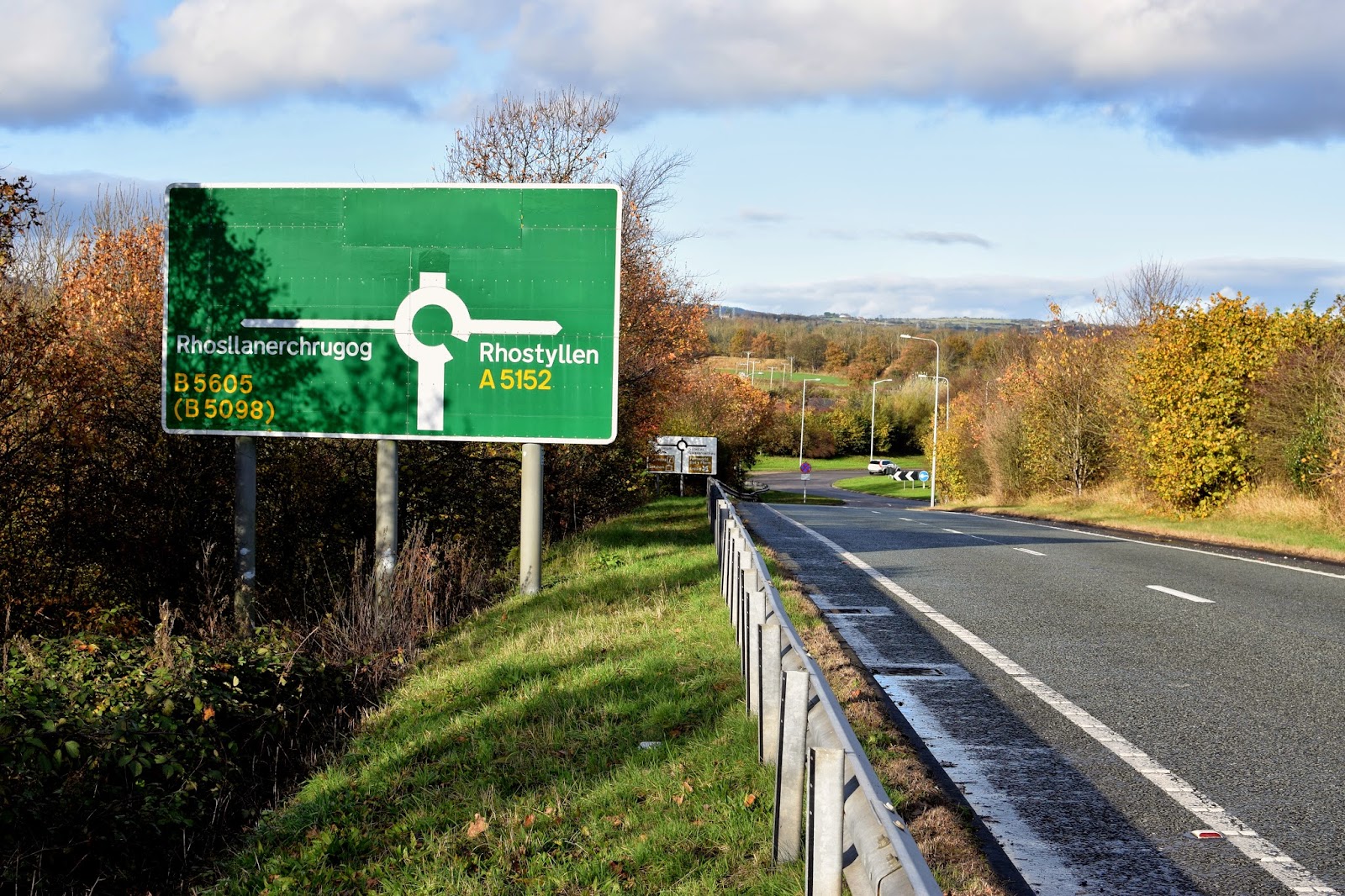 It's huge to accomodate the length of the name.
The famous one with the long name gets shortened on signs to Llanfair PG,
(yes - I can say it).
I've always said I wanted a picture of this sign so Mr AP took one
and made it into a christmas card for me.
I'm now hoping for one of the sister sign on the other side of the roundabout.
Gotta love a diptych.

So you know I said I wanted a new challenge….. well the new job is certainly doing the trick.
I am in the process of getting to grips with:


I am very fortunate to have a supportive team (and husband),
and a sweetly patient office buddy who is getting used to repeating herself!
This week's achievements included getting a bi-lingual blog on the museum website*
(note to self - include the museum name next time)
and the installation of lamb cam - my web streaming project for March.
More of that later - it's beyond exciting….


*our website is recently revamped, so me wanting to write blogs that look 'bloggy' is exposing a whole load of coding bugs. Big love to Sara in digital content for her patience and virtual hand holding as I wrestle with it.
Posted by Asparagus Pea at 18:22 16 comments:

For the past few months all my creativity has been going into job applications.
Several options - all involving a change of direction.
So the good news is…… I got the job.
(the Plan A job) 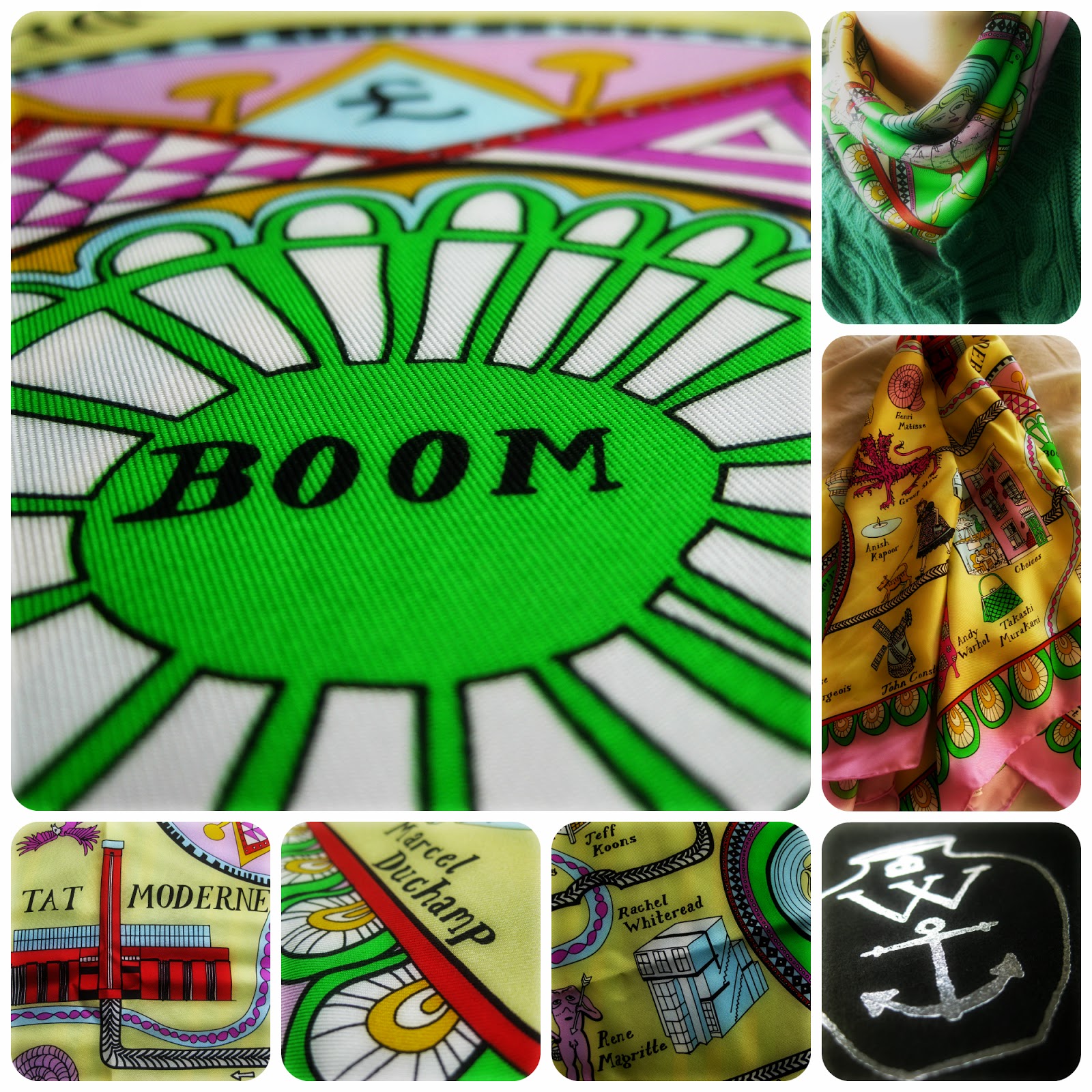 Still at the museum, but working for the Events and Marketing department.
I'll be going through our events programme and looking at developing the informal education side of things. That means I get to look at all the fun stuff like farming, food, green woodworking, textiles etc. It's a big new challenge and a chance to get away from the grind of manual labour.

It will be my third career…
Does that make me a flake?
Or a polymath?
Or a flaky polymath….

It means I'll be hanging up my secateurs.
The end of the garden path is in sight…
I feel a blogging break is in order while I re-invent myself.
There's no road map, but that's exciting right?
….and scary,
(good scary rather than bad scary).

Thank you for all your support and companionship,
in the real world and the blogosphere.

The Grayson Perry scarf was a birthday present from Mr Asparagus Pea. It's designed as a road map for aspiring artists, based on the silk maps that were given to WWII pilots in case they were shot down behind enemy lines. The 'W Anchor' is his potter's mark, it always makes me giggle. Mr AP was so delighted because he bought it for me after we saw it at Tate Britain, which was long before I publicly announced that I was turning into Mr Perry!

So what do you do on a rainy Sunday at work after your second drenching of the day? Put all your wet gear in the drying room and head for the shed to do a bit of tidying up and sorting out. I started off by checking through the all the trays of stored potatoes, shallots and garlic that we have put away to replant next spring – my nose was telling me there were a few mouldy specimens lurking within. In the middle of all the spuds I came across a couple of trays of Martock beans, still in their pods and waiting to be processed. It’s the medieval broad bean that we grow in the garden of our Tudor longhouse – smaller and more modest than its modern descendants, more like a black-eyed pea or a small borlotto. 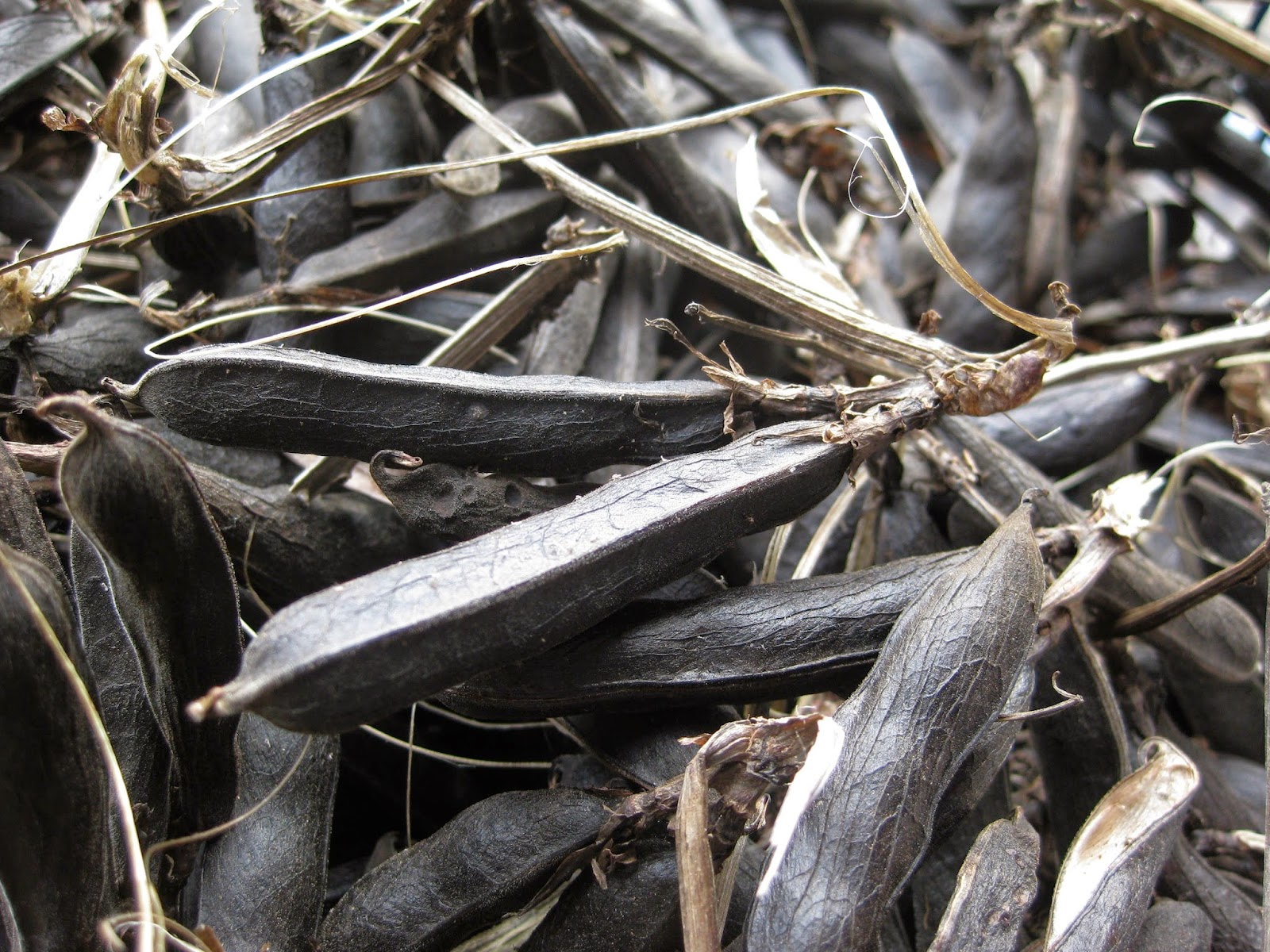 As I sat for a peaceful hour shucking them from their pods I was reminded of the book I am currently reading ‘Down to Earth – a guide to simple living’, by Rhonda Hetzel. She writes an inspirational blog of the same name, detailing her life with her husband and family in Queensland, Australia. She talks about mindfulness and finding pleasure in self-reliance and simple tasks – relearning the skills that our ancestors took for granted and practising them as a subversive act. Now I don’t know who my medieval ancestors were, but from my height and colouring I’d say they were Northern European (we grow our bones long in my family). At this time every year they would have been sitting around shucking beans, ready to store them safe and dry, away from mice and mould. With every satisfying rattly plunk of bean into bucket, there is a feeling of another morsel saved, another mouth fed. 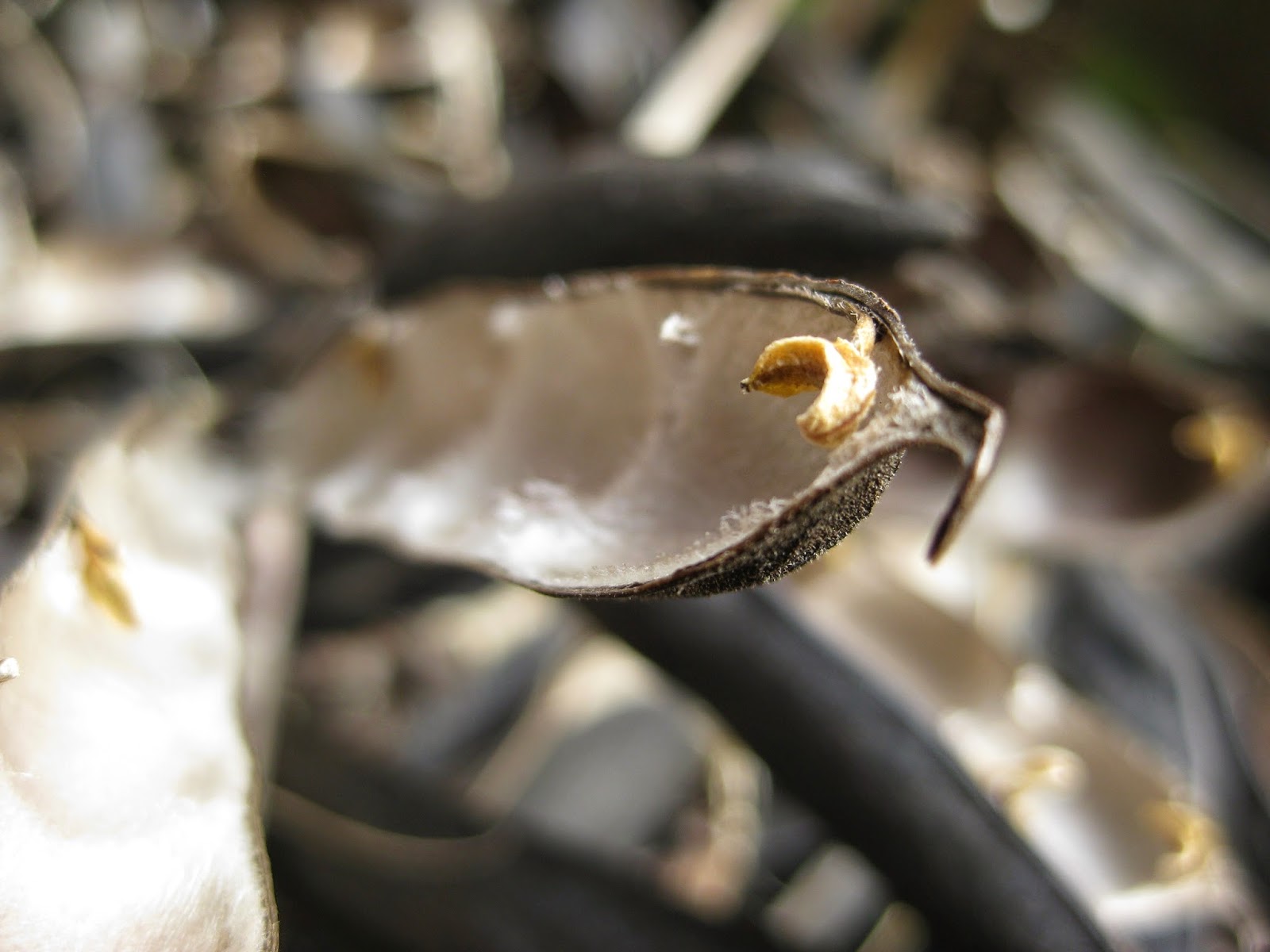 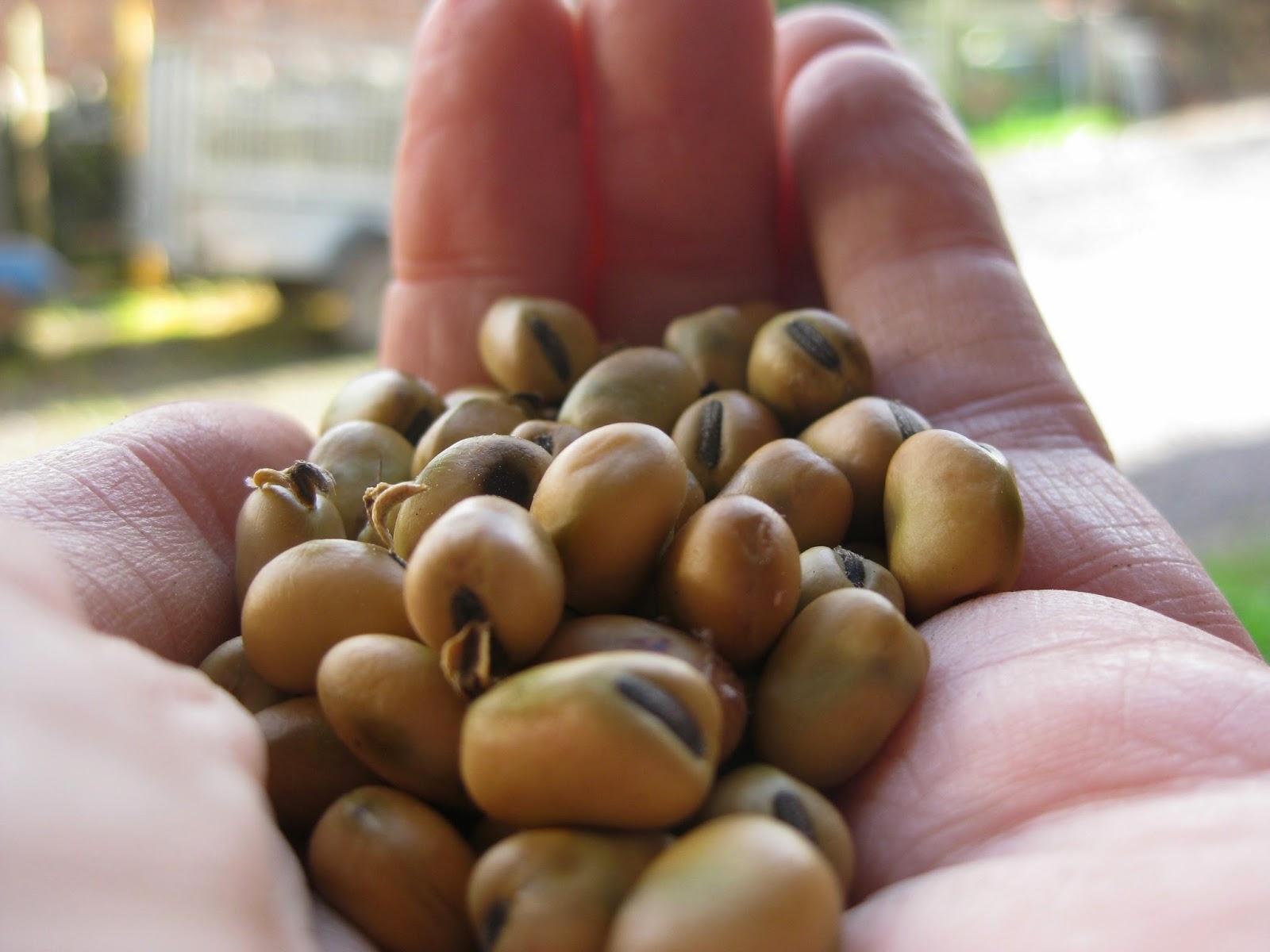 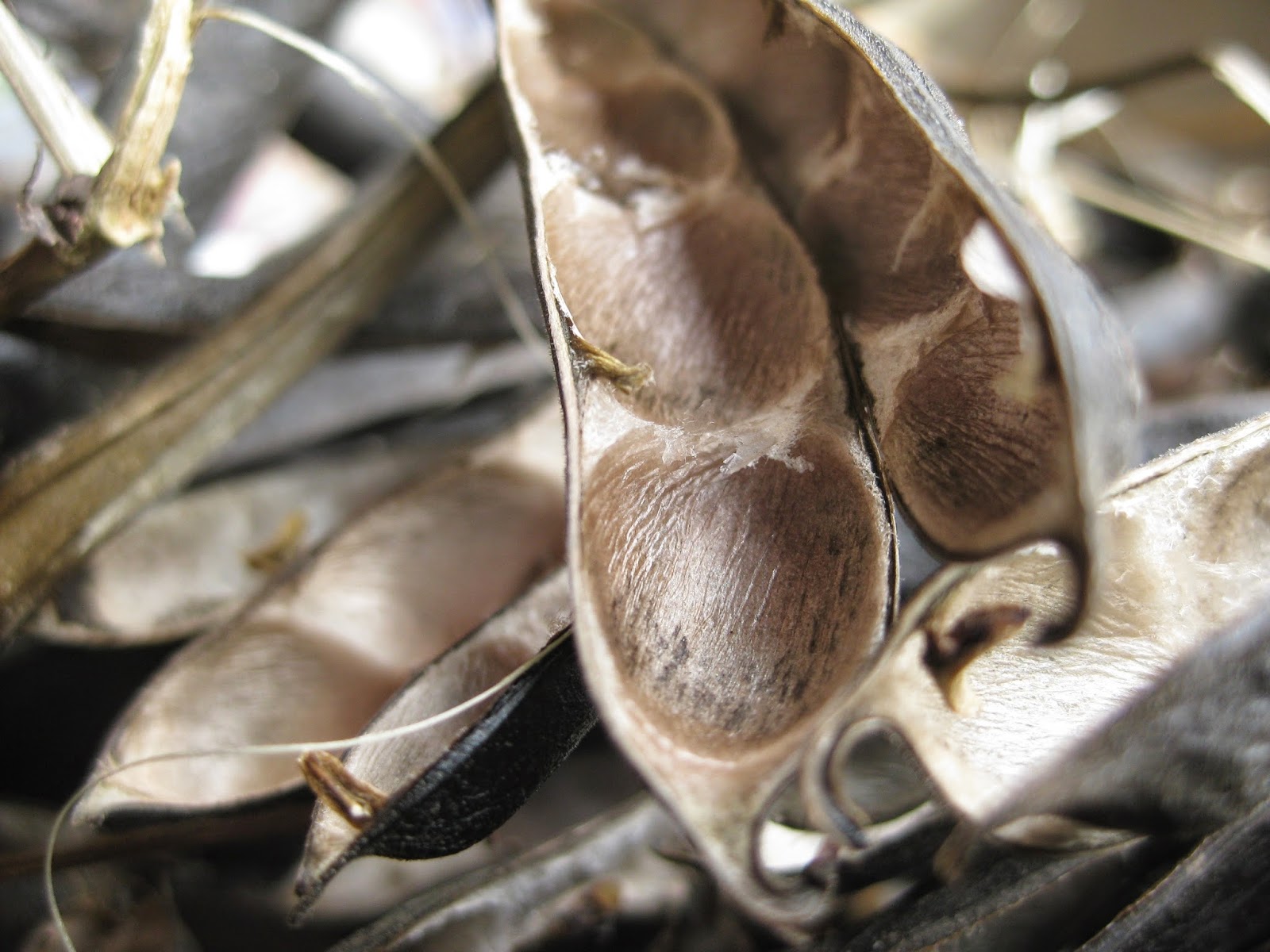 My two little trays of beans yielded about 1.5 kilos of dry beans - that's 20 portions of food. I haven't tried cooking Martock beans before, so I decided it was time for a taste test. After a long soak - me, half an hour in a hot bath and the beans overnight in a bowl of cold water, I set about cooking them… 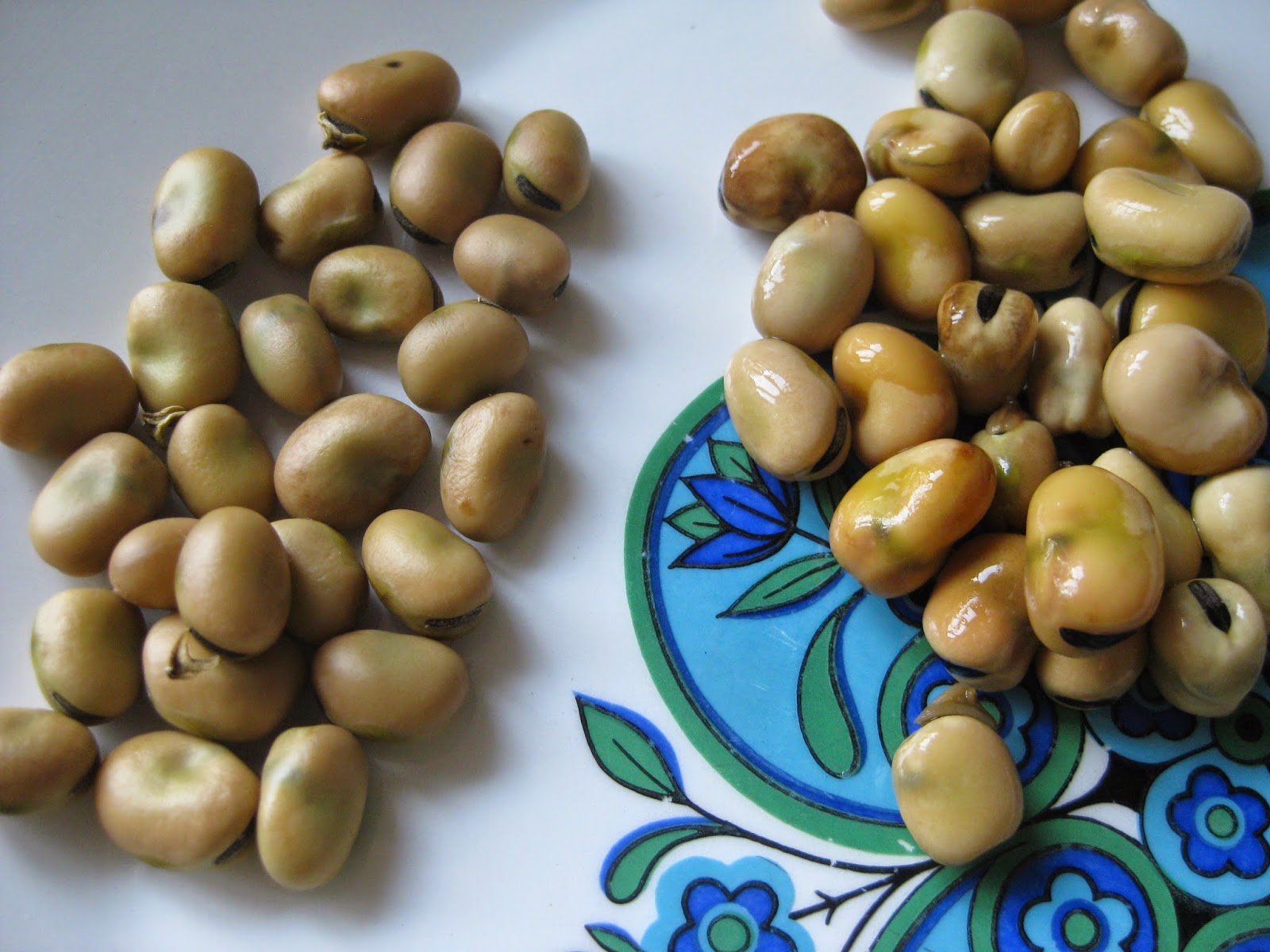 A little research* revealed that not only were these humble beans a staple in Tudor times, they were feeding Iron Age Brits, and are still highly prized in Middle Eastern cuisine. This what the Pharaohs were eating for breakfast. Field beans are still grown in Britain as part of an organic crop rotation - but the beans are mostly exported to Arab countries to be made into the Egyptian classic Ful Mesdames (the 'ful' is pronounced 'fool'). The recipe has many variations - but the essential ingredients seem to be cooked beans mashed with a little garlic, olive oil, lemon juice, salt and cumin. Somewhere between hummus and refried beans it has a delicious earthy comfort that can be dressed up with any number of garnishes like harissa, crumbled feta or parsley. Here it is in its naked state - tonight it will be served with the traditional accompaniments of hard boiled eggs and flatbreads. 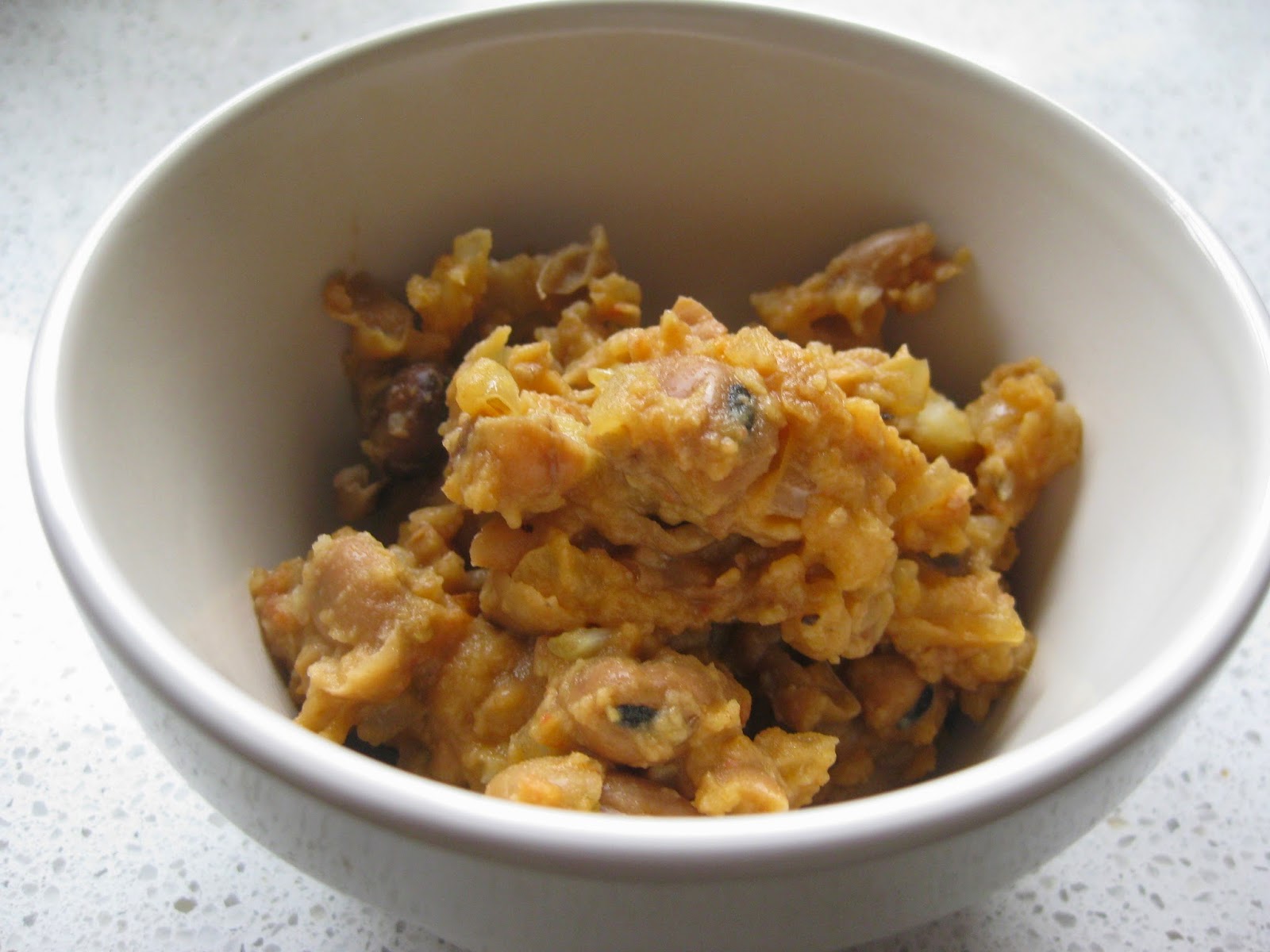 *In the course of my research I came across the fantastic Hodmedods which has everything you could wish to know about British grown pulses. There are also loads of recipes and an online shop that sells all kinds of exciting products like roasted peas with horseradish (wasabi peas), and salted roasted fava beans (habas fritas). You've got to love an iron age bar snack right?!?!
Posted by Asparagus Pea at 16:00 7 comments:

So I finally joined facebook and instagram.
I know - late to the party huh?!?!
But as Mrs Madrigal would say*
'You don't have to keep up dear,
you just have to keep open…' 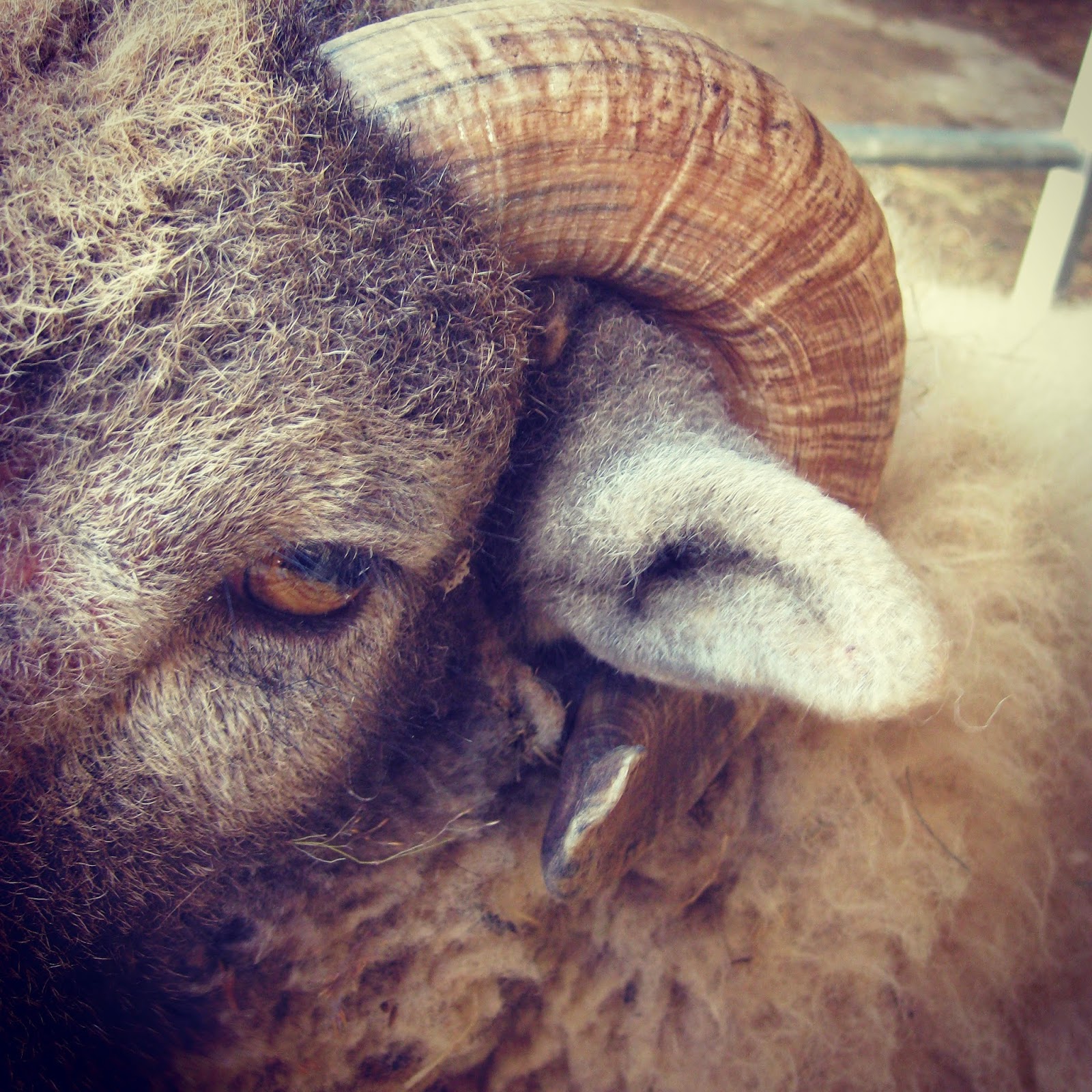 October is the time for our rams to join their ladies at the museum.
Are they not the most beautiful furry ears you've ever seen? 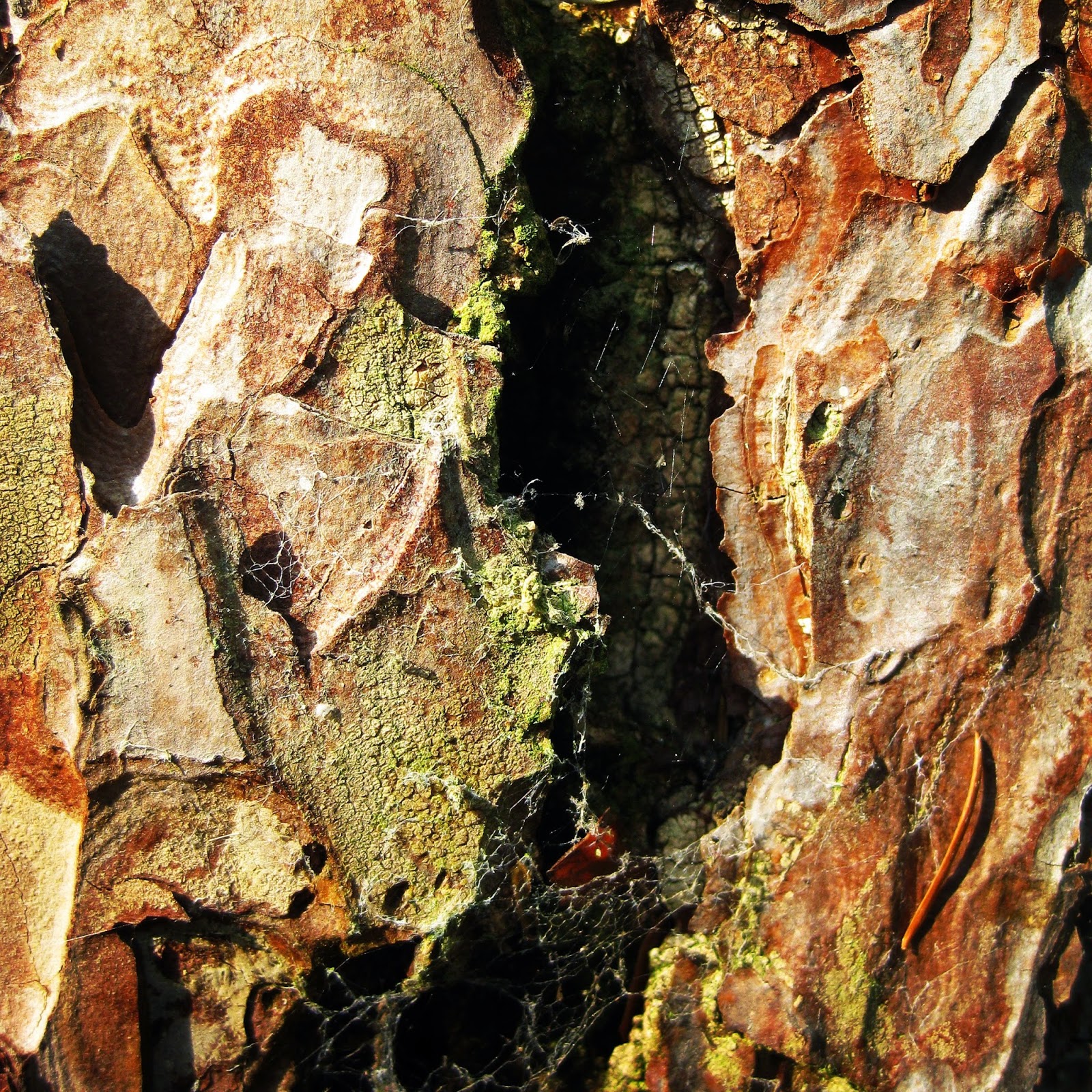 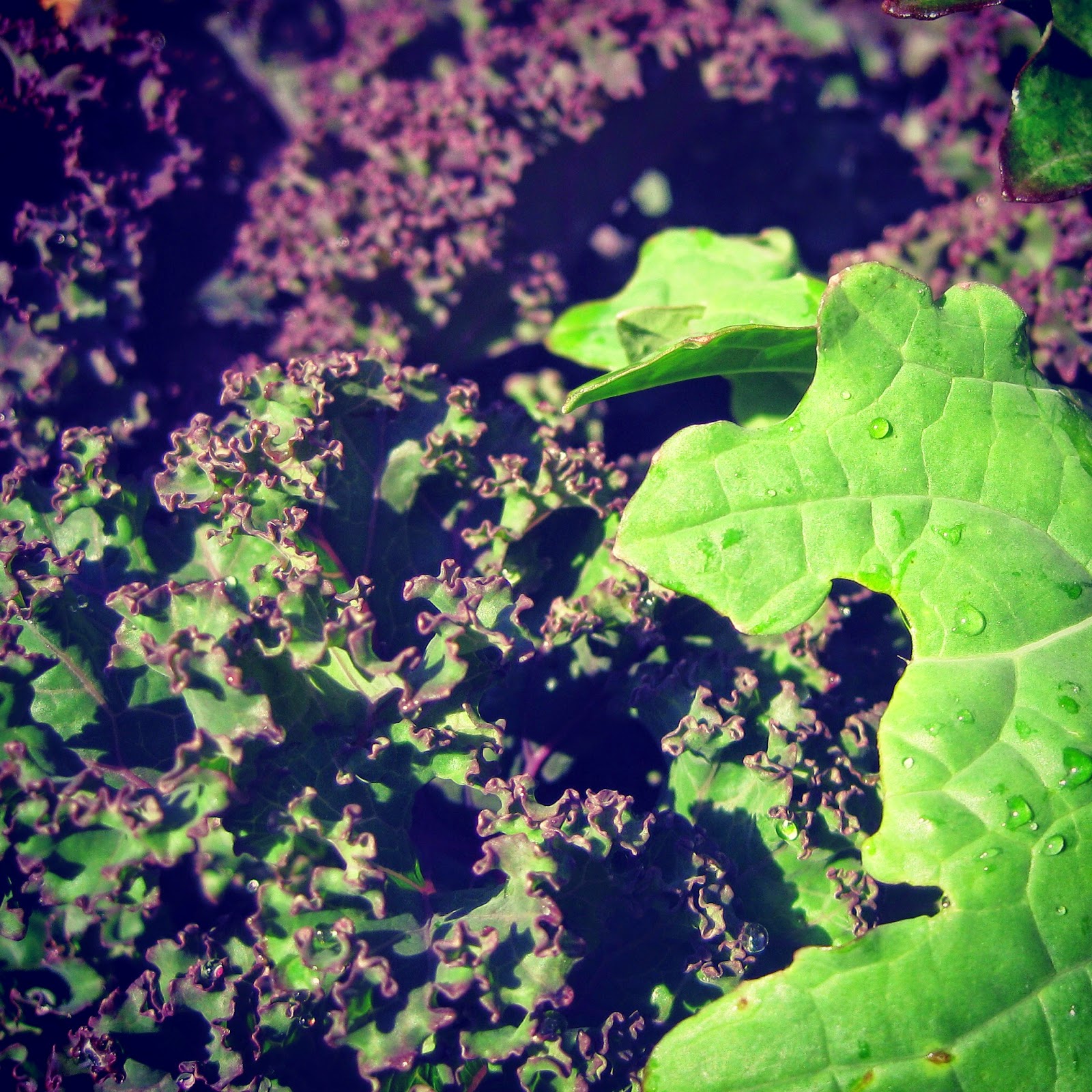 2 kinds of kale ready to go to the restaurant kitchens. 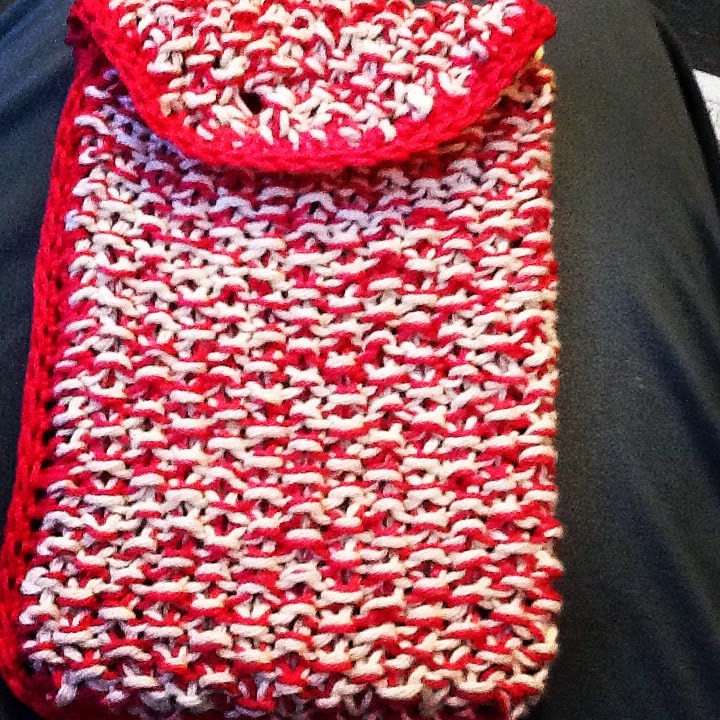 My lovely friends bought me a kindle for my birthday
- so I knitted up a cosy cover for it. 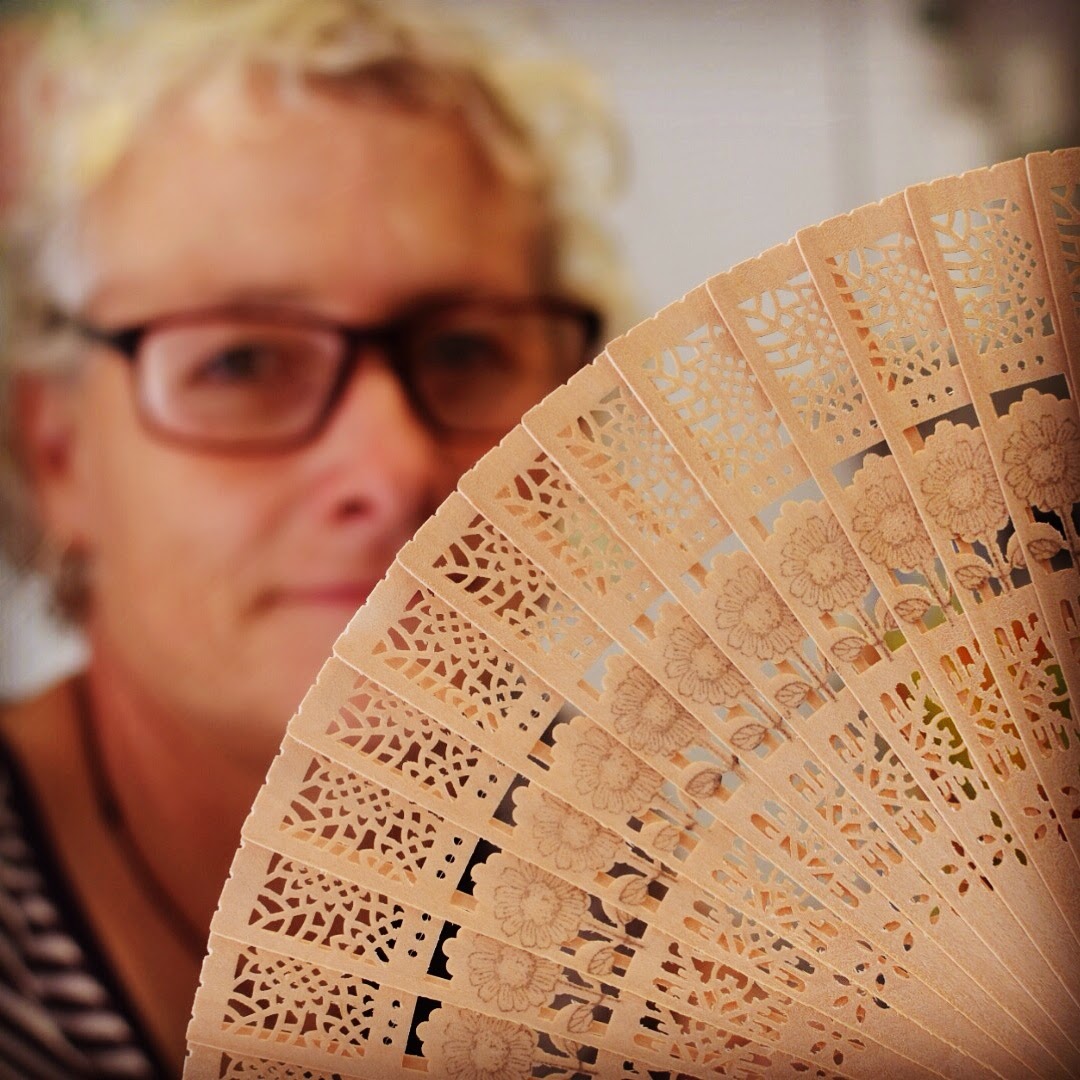 The birthday was a big one, so Mr AP and I headed off to Barcelona to celebrate.
A lady needs a fan in southern europe - this little wooden beauty cost one euro. 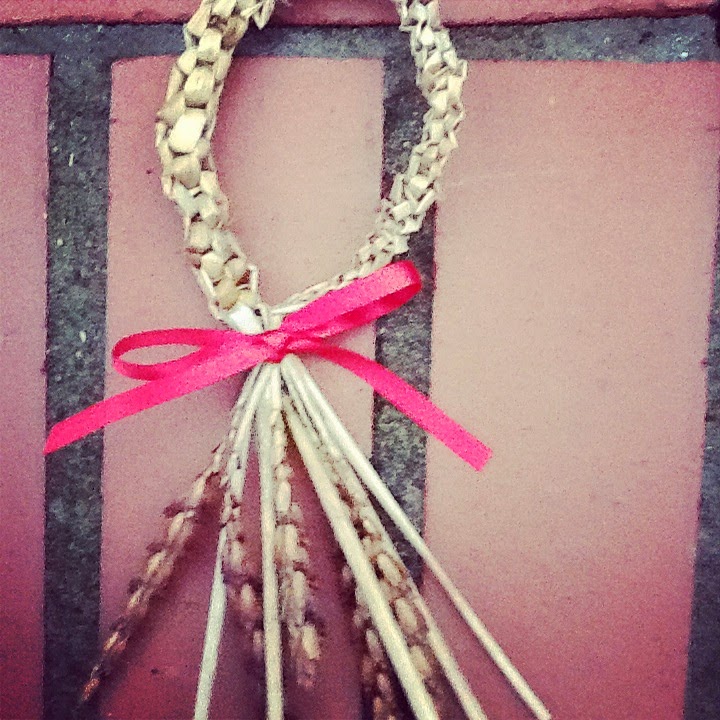 I whipped up a few prototype spelt corn dollies for Siân
- she was having a craft emergency!

…and finally, my favourite autumn poem by the fabulous John Hegley. 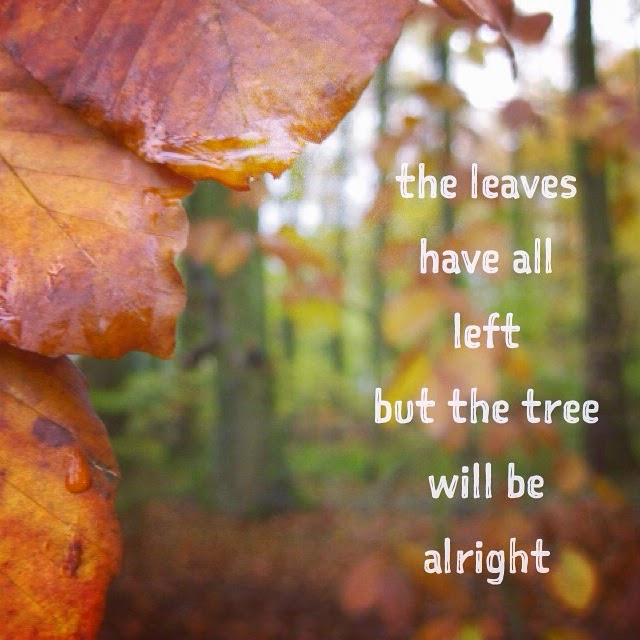 The winds of change are blowing as we head into November.
Snuggle up!   xxxxx

what's a girl to do?

I was, for various professional reasons,
trying to have a hiatus from putting daft pictures of myself on here.
But then one day you wake up and realise…. 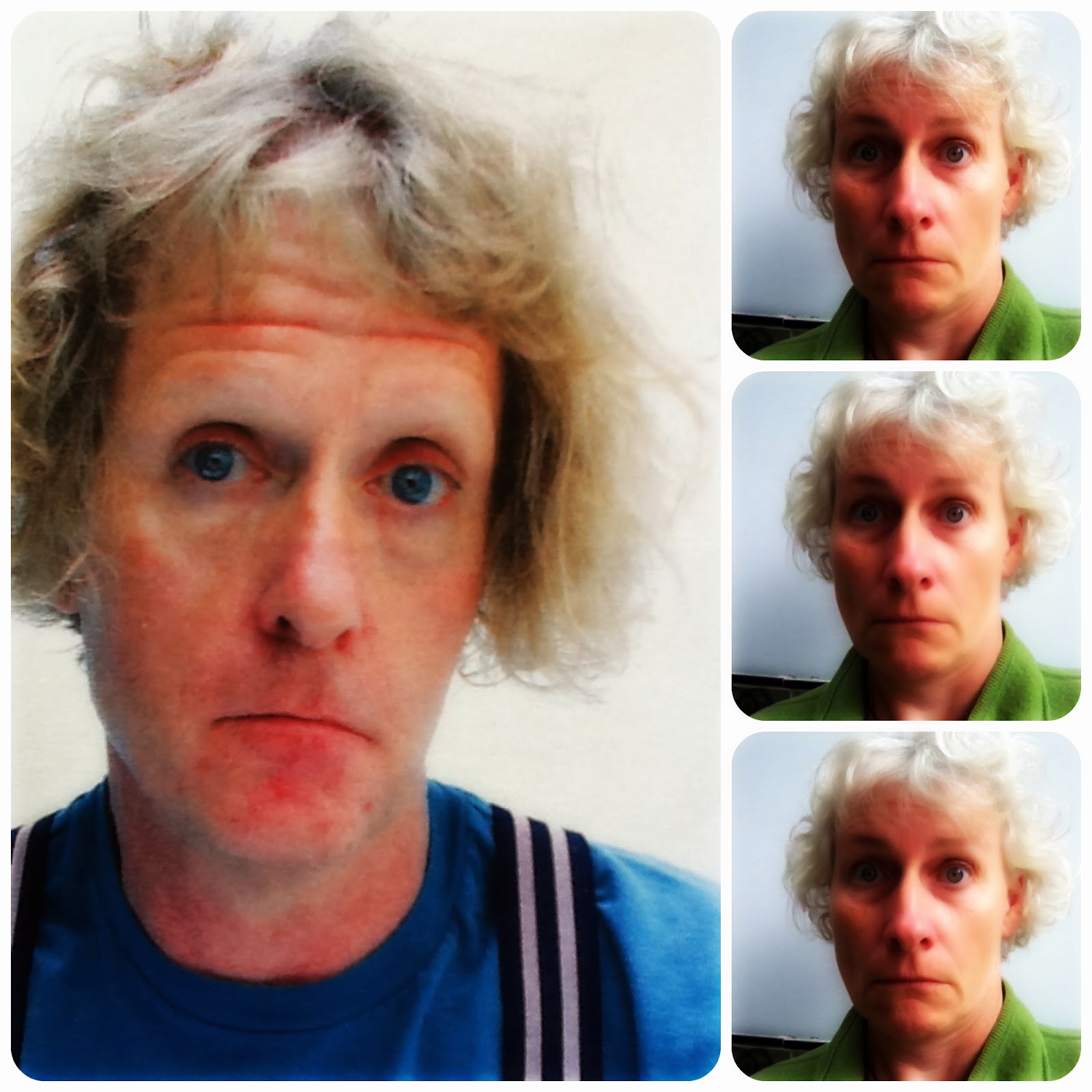 Do you have a 'bad hair day alter ego'?
(mine used to be Ken Dodd, so Grayson is an improvement)

image of grayson by tim walker from here
Posted by Asparagus Pea at 13:15 7 comments:

Email ThisBlogThis!Share to TwitterShare to FacebookShare to Pinterest
Labels: art

there's change in the air

We're having a little late summer glory here, but autumn is in the air. The porch is full of leaves, and the spiders make a new lace veil for me to walk through every day as I head out the door for work. This weekend was our food festival so we decorated the chapel for the harvest thanksgiving service. 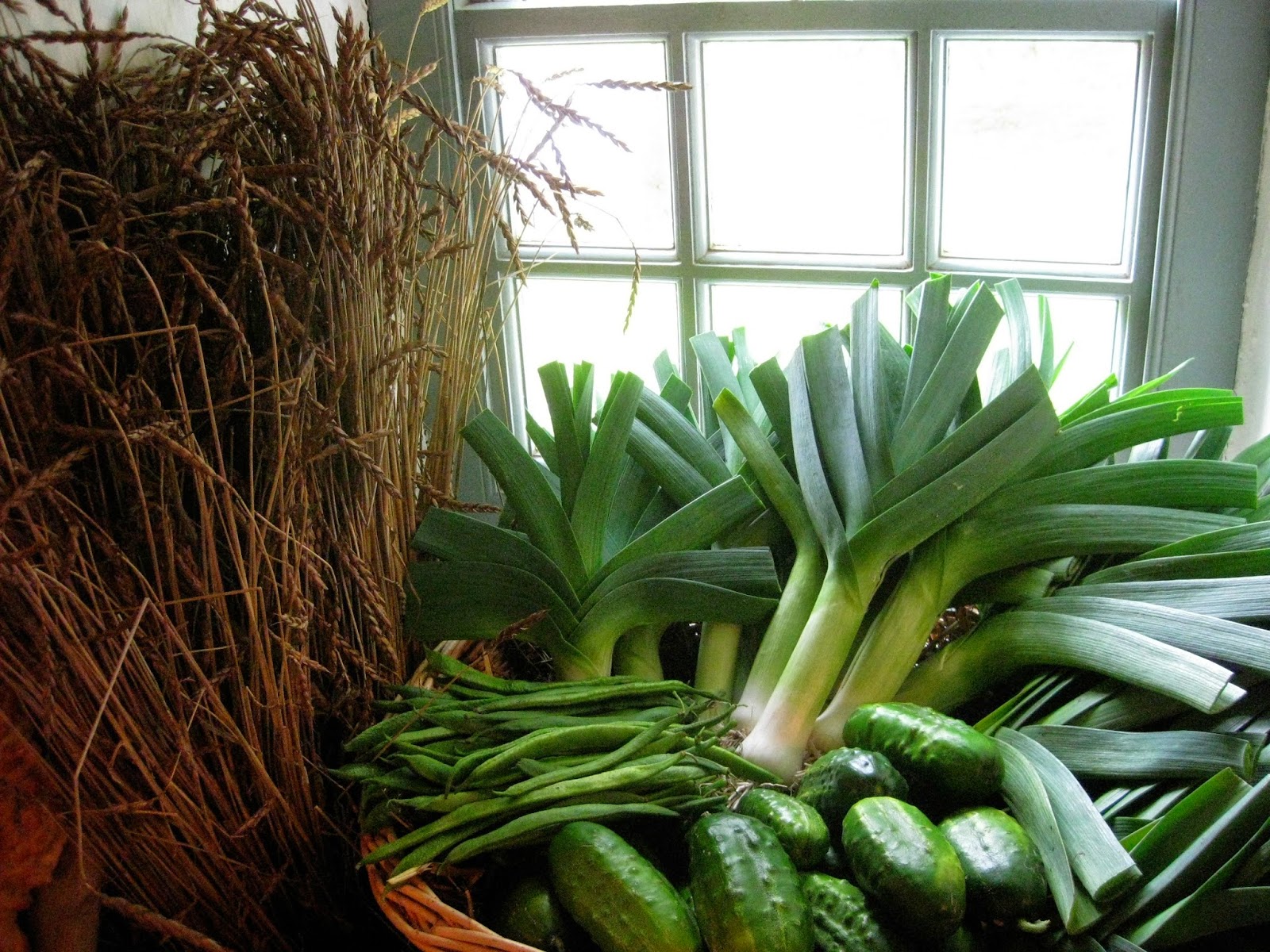 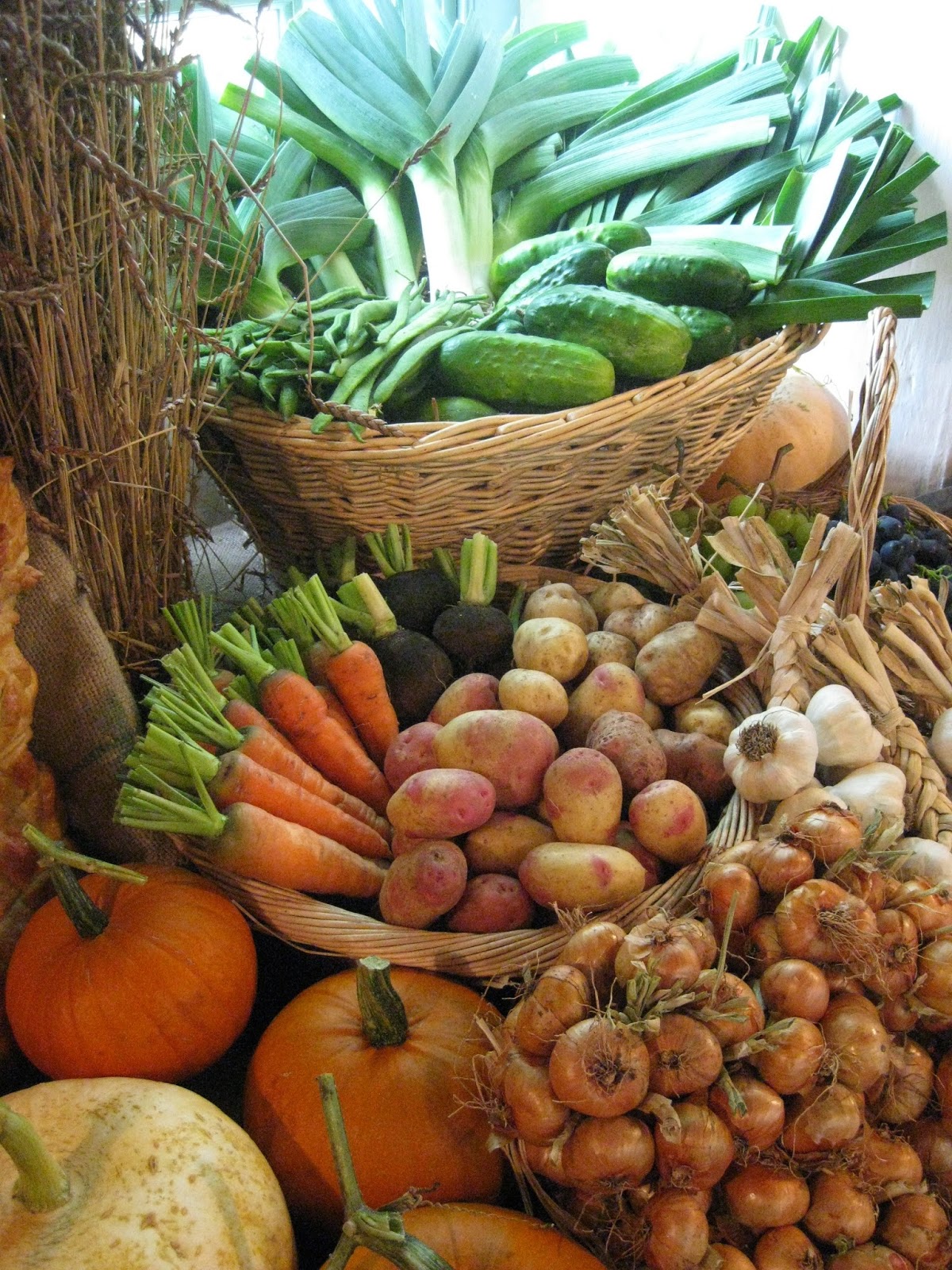 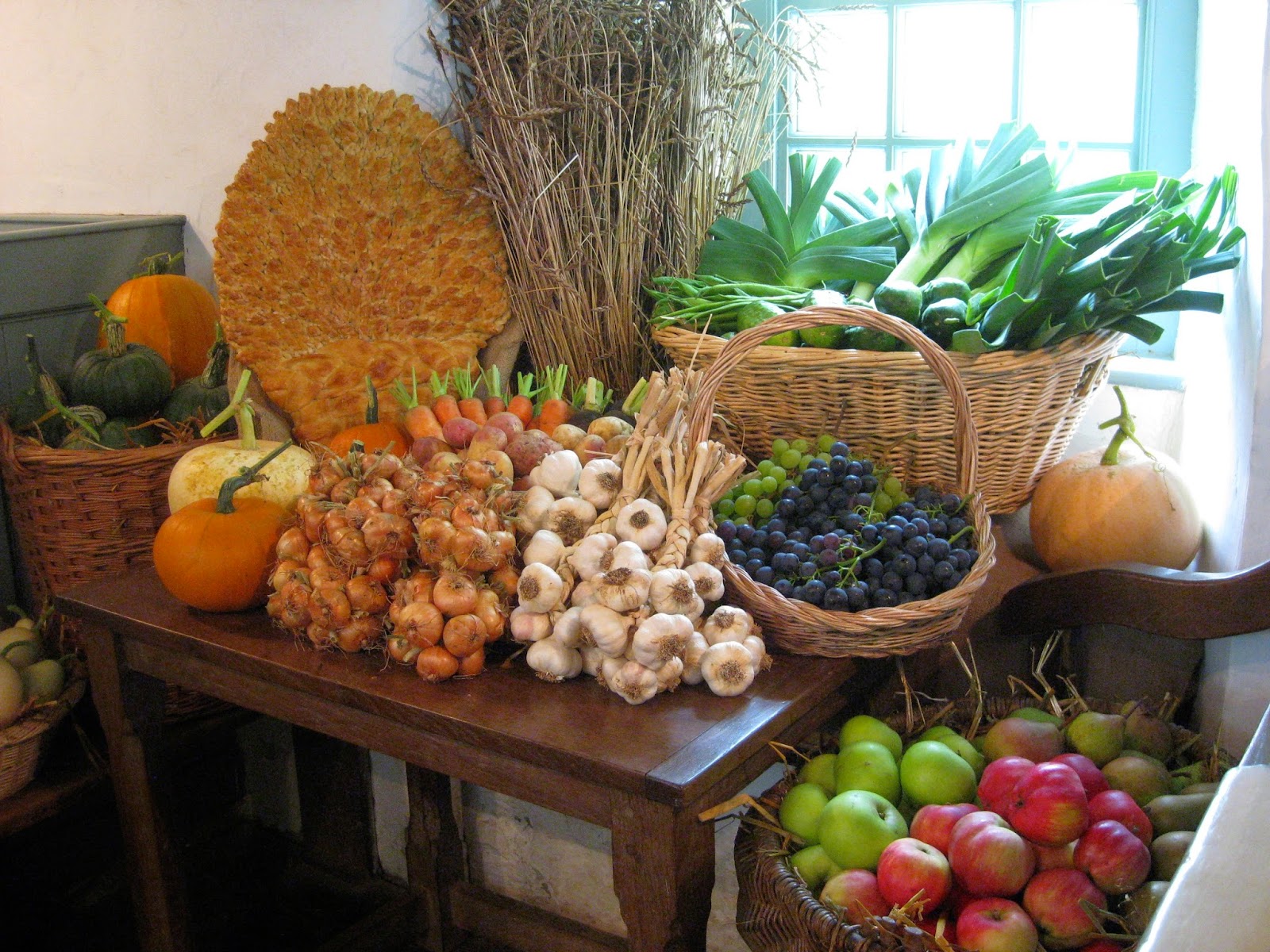 Obviously if I had seen these before yesterday then the whole thing may have looked a little different!

Guiseppe Arcimboldo was an Italian Mannerist painter - these are his four seasons.
He was working in the C16th so they're great for those doing 'history gardening' like myself.
I particularly like the snozzcumber nose in the image of Summer.
Note to Siân - vegetable portrait sculptures next year?

At home I'm changing the bed and putting the winter duvet on.
Putting away t-shirts and digging out woollies.
Trying to find some socks.
Thinking about autumn trips and plans.
Exciting - I'll keep you posted...

throwing the baby out with the bathwater

It's the 1st of September and this is my 100th post.
Is this significant?
(If you're me - not particularly).
Or does the theory of coincidence rely on selectively noticing stuff,
because you happened to notice something else the other day?
(If you're me - probably).
But sometimes the cosmic latticework does start to twitch,
and things that seem unrelated start to come together. 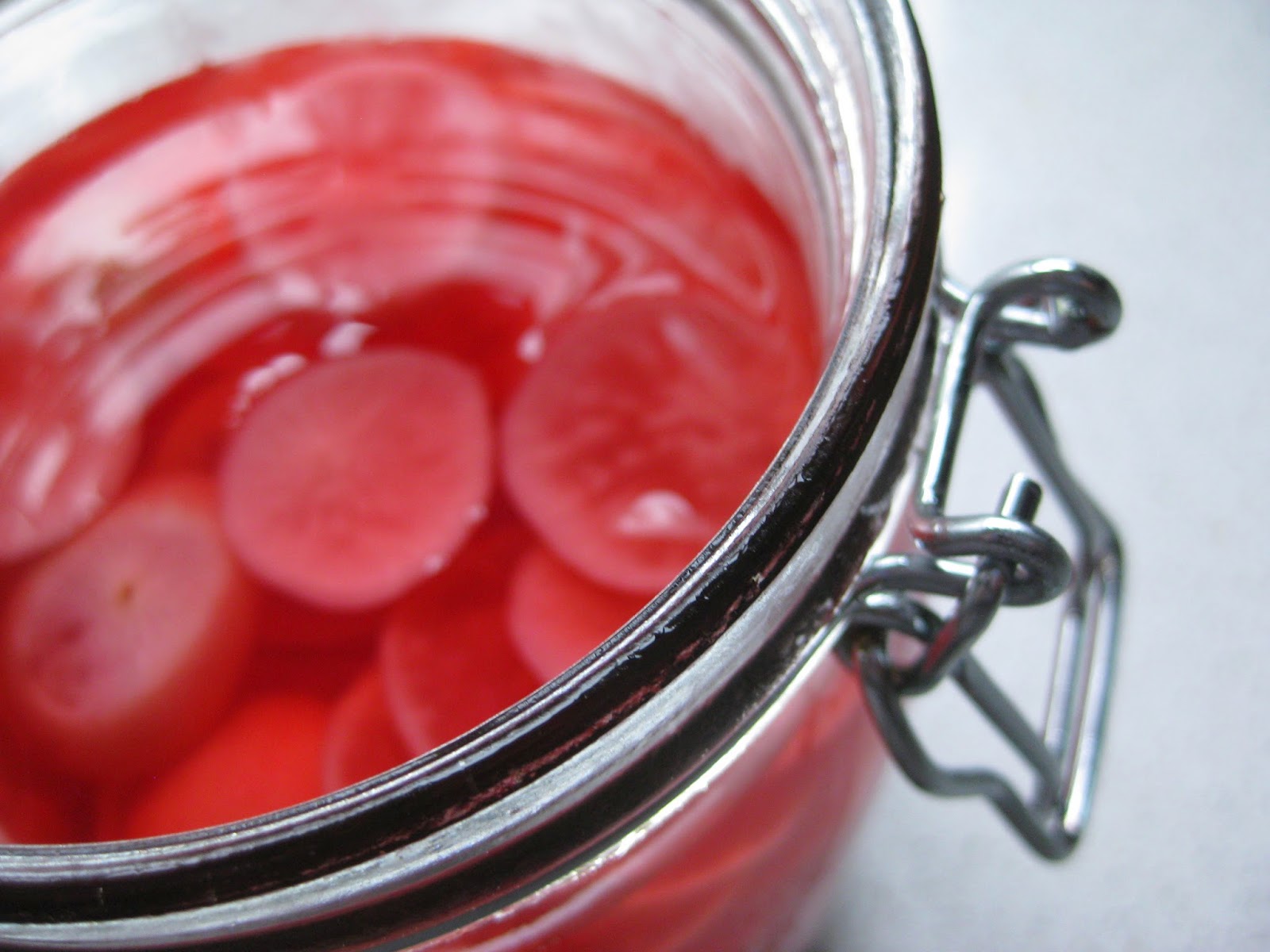 Okay - so I know you're thinking
'Enough already with the pickling!!!'
I promise this is it for a while….
(fridge now groaning with fermented delights)* 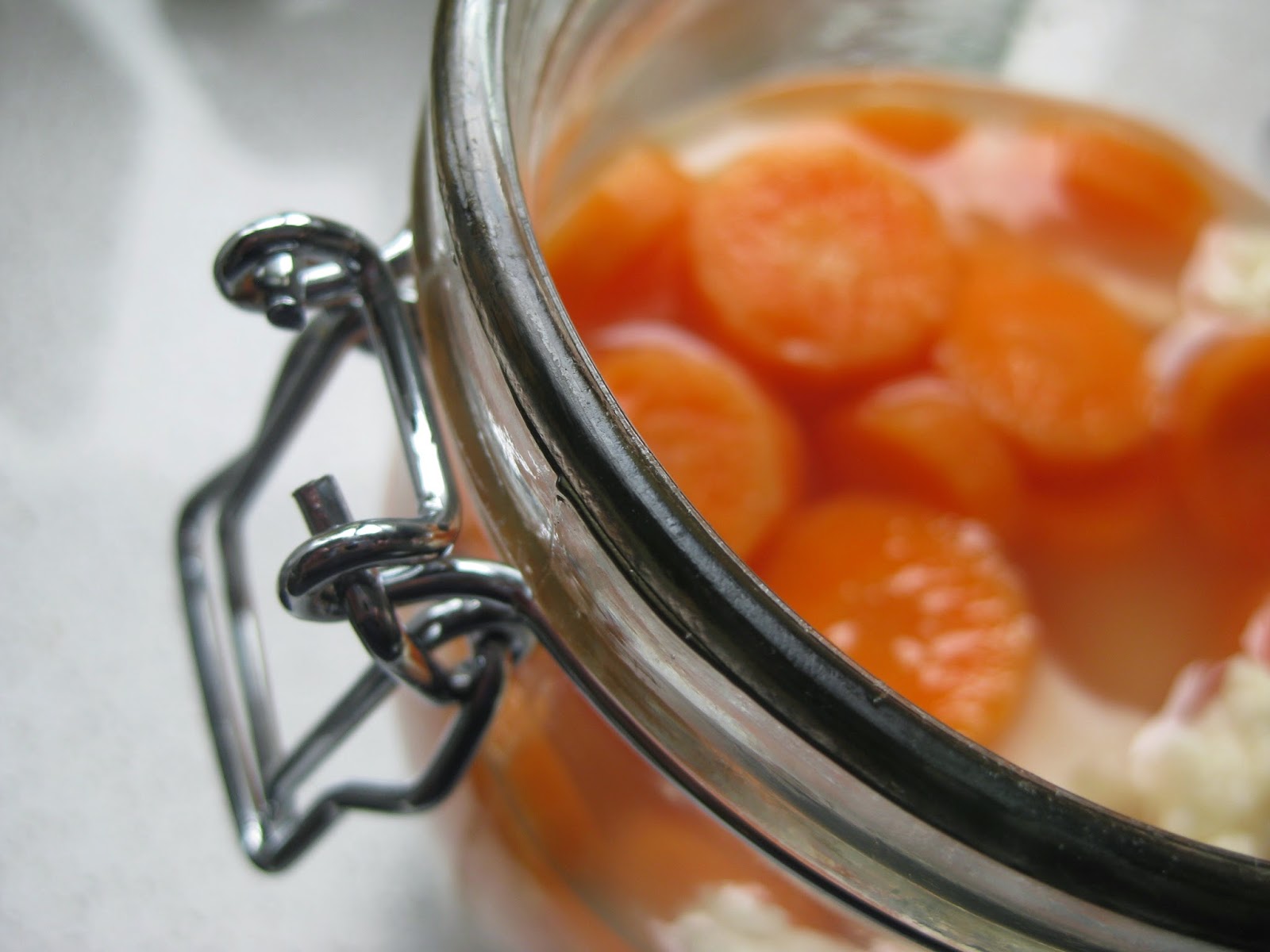 I genuinely started all this pickling malarkey from the basis of:


But as soon as I started reading up on what to do, I stumbled into the world of the new 'hottest thing in nutrition' - lacto-fermentation. This has nothing to do with dairy by the way, the 'lacto' bit refers to the lactobacillus which proliferate during the fermentation of the veggies. The finished products are alive, unlike the store bought ones, which have been pasteurised for shelf life at room temperature. This is pro-biotics but without the expensive branded yoghurt drinky things.

I know - the last hottest thing was cupcakes and minted pea puree!

But there is a whole pile of research being done into links between gut health and immune responses - including out of control immune responses like allergies. Better brains than mine are applying themselves to this and I'm not saying that it's a retro fix if you've already got severe allergies. But it does seem to make sense that biodiversity is a good thing when it comes to your guts as well as your garden. Inclusion of bacteria rather than exclusion, especially in early life, is being preached…

Now, I've always been in favour of what I would regard as a normal amount of sluttishness in the housekeeping department, and am a long time believer in 'Eat dirt, it's good for you!' (Having said that, I've just been scrubbing the crap off from round the back of the kitchen taps - but that's mostly displacement activity because I'm supposed to be filling in my tax return). Nobody wants to live in squalor, but maybe in our quest for a hyper-clean, pasteurised life we have thrown the baby out with the bathwater…

...glass of bathwater anyone?

* lacto-fermented radishes might just be my new favourite thing in the world ever. All the deep savouriness of a good runny cheese combined with a delicate vegetable pickle. Umami, huh? Who knew?